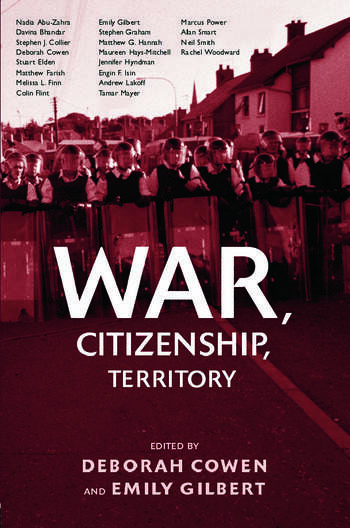 For all too obvious reasons, war, empire, and military conflict have become extremely hot topics in the academy. Given the changing nature of war, one of the more promising areas of scholarly investigation has been the development of new theories of war and war’s impact on society. War, Citizenship, Territory features 19 chapters that look at the impact of war and militarism on citizenship, whether traditional territorially-bound national citizenship or "transnational" citizenship. Cowen and Gilbert argue that while there has been an explosion of work on citizenship and territory, Western academia’s avoidance of the immediate effects of war (among other things) has led them to ignore war, which they contend is both pervasive and well nigh permanent.  This volume sets forth a new, geopolitically based theory of war’s transformative role on contemporary forms of citizenship and territoriality, and includes empirical chapters that offer global coverage.