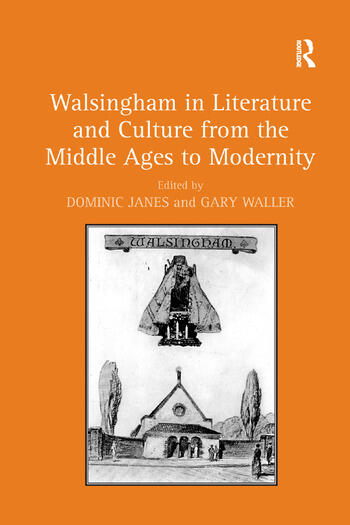 Walsingham in Literature and Culture from the Middle Ages to Modernity

Walsingham was medieval England's most important shrine to the Virgin Mary and a popular pilgrimage site. Following its modern revival it is also well known today. For nearly a thousand years, it has been the subject of, or referred to in, music, poetry and novels (by for instance Langland, Erasmus, Sidney, Shakespeare, Hopkins, Eliot and Lowell). But only in the last twenty years or so has it received serious scholarly attention. This volume represents the first collection of multi-disciplinary essays on Walsingham's broader cultural significance. Contributors to this book focus on the hitherto neglected issue of Walsingham's cultural impact: the literary, historical, art historical and sociological significance that Walsingham has had for over six hundred years. The collection's essays consider connections between landscape and the sacred, the body and sexuality and Walsingham's place in literature, music and, more broadly, especially since the Reformation, in the construction of cultural memory. The historical range of the essays includes Walsingham's rise to prominence in the later Middle Ages, its destruction during the English Reformation, and the presence of uncanny echoes and traces in early modern English culture, including poems, ballads, music and some of the plays of Shakespeare. Contributions also examine the cultural dynamics of the remarkable revival of Walsingham as a place of pilgrimage and as a cultural icon in the Victorian and modern periods. Hitherto, scholarship on Walsingham has been almost entirely confined to the history of religion. In contrast, contributors to this volume include internationally known scholars from literature, cultural studies, history, sociology, anthropology and musicology as well as theology.

Dominic Janes is a Lecturer in Art History at Birkbeck College, University of London, UK.

Gary Waller is Professor of Literature and Cultural Studies in the School of Humanities at Purchase College, State University of New York, USA.

' ... a breadth and depth which could mean [the book] has a wide appeal to different people. [...]One of the fascinating things I reflected on whilst reading this book was how secular it feels. For the first time I was reading a volume which was about the social history of this particular place rather than focusing on its intrinsic spirituality.' New Directions

'Perhaps the greatest strength of the book is that it tries to encompass so many different areas of study and theoretical commitments within the study of this one medieval English pilgrimage shrine. In few other books would one find sexuality studies alongside art historical approaches to pilgrim badges, or music and memory studies alongside considerations of the construction of the modern shrine and Walsingham’s shadow across early modern literature and discussions of place and Tudor strengths.' Sixteenth Century Journal

Walsingham in Literature and Culture from the Middle Ages to Modernity