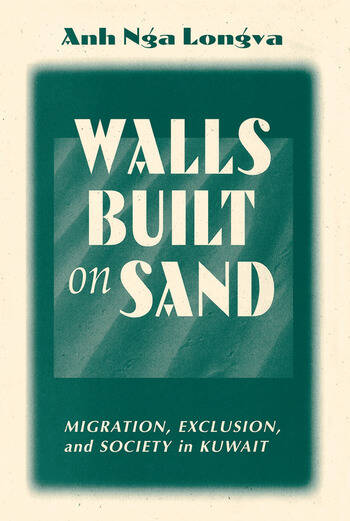 Walls Built On Sand: Migration, Exclusion, And Society In Kuwait

When Iraq invaded Kuwait in 1990, the sight of tens of thousands of non-Kuwaiti Arabs, Indians, East Asians, and Westerners fleeing or trapped under occupation made the outside world suddenly aware of a singular fact of Kuwaiti society?that Kuwaitis are an absolute minority in their own country. Basing her analysis on extensive fieldwork and archival research, the author examines the social dimension of labor migration to Kuwait since independence in 1961, exploring how the presence of over one million foreign workers has influenced the way Kuwaitis organize their lives and perceive themselves. In particular, Longva looks at the relations between two sharply differentiated social categories and the politics of exclusion that have allowed Kuwaitis to protect their rights and privileges as citizens against infringement by the huge influx of expatriates. Longva examines the little-studied system of kafala, or sponsorship, under which all foreign workers enter and reside in the country, showing how it has become the most critical source of power for native Kuwaitis vis-is immigrants. She also addresses aspects of ethnicity and class, describes the life of expatriates, and looks at developments in gender relations and the role of women in building the national identity in the context of migration and modernization.

List of Tables and Figure, Acknowledgments, Map of Kuwait, Map of Kuwait City and Suburbs, Introduction, Kuwait in the Literature, The Concept of the Plural Society, Migration and the Nation-State, Pluralism and Integration: A Research Program, How to Study Unbounded Worlds? Fieldwork and Problems Encountered, Methodology, Notes, Kuwait Through History: A Tradition of Migration and Open Networks, Pearl Diving, Sea Trade, and Caravans, Politics and Society in Pre-Oil Kuwait, Oil: Prosperity and Its Implications, Widening the Networks: The New Labor Migration, A Multi-Ethnic, Multi-Cultural Society, Notes, The Politics of Exclusion, Putting Exclusion in Place, The Delineation of Ethnic and Social Categories, The First Dichotomy: Kuwaitis-Non-Kuwaitis, The Second Dichotomy: Arabs-Non-Arabs, The Third Dichotomy: Muslims-Non-Muslims, Exclusion and the Conceptualization of Work, The Division of Labor According to the Logic of Exclusion, Notes, The Structure of Dominance: The Sponsorship System, The Kafala, Power: The View from Outside, Above, and Below, The Kafala in the Private Sector (“Visa No. 18”), The Kafala in Business Partnership (“Visa No. 19”), The Kafala in the Domestic Sector (“Visa No. 20”), The Power of the Kafeel, The Kafala: A Control Mechanism by the Civil Society, Power and Powerlessness: The Kafala Seen by Kuwaitis, Notes, Conceptualizing “Us” and “Them” Through Everyday Practice, Group Differentiation and Group Identification, Signaling Identity Through the Dress Code, Reading the Signals, Ethnic Identities and Gender Identities, Ethnic Stereotypes, Opting Out: The Never-Never Land of Western Identity, The Definition and Perceptions of “Us” and “Them,” Ethnicity and Class, Notes, Expatriate Life: Liminality and an “Ad Hoc” Way of Life, A Migrant Career, Human Agency and International Labor Migration, A Population of Like-Minded Individuals, Life is a Place Elsewhere, The Social Content of Liminal Time, Time: The Making and Unmaking of Relationships, Time, Space, and Migration, Time in Cultural Analysis, An “Ad Hoc” Way of Life, Notes, Gender Relations, Ethnicity, and the National Project, “Change” and Kuwaiti Women, Subverting Spatial Confinement: The Hijaab and the Car, Reproducing Social Confinement (I): The Constraints of Ethnic Stratification, Reproducing Social Confinement (II): The Discourse of Motherhood, “Citizenship” versus “Hareem,” Gendered Citizenship, Ethnicity, and Class, Women as Nation-Builders, Change and Continuity: The Shifting Sands of Modernity, Notes, Pluralism and Integration, Integration in Plural Societies, Integration, Coercion, and Material Interests, What Kind of Commonality? Subjective Integration: The Role of Experience, Towards an Anthropology of Deterritorialization, Notes, Postscript, Notes, Bibliography, Index, About the Book and Author

Anh Nga Longva is associate professor of social antropology at the University of Bergen, Norway.

Walls Built On Sand: Migration, Exclusion, And Society In Kuwait