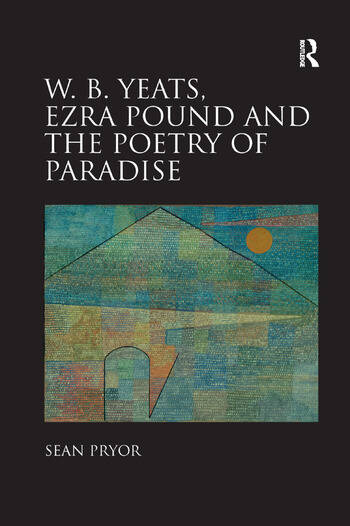 W.B. Yeats, Ezra Pound, and the Poetry of Paradise

Emphasizing the interplay of aesthetic forms and religious modes, Sean Pryor's ambitious study takes up the endlessly reiterated longing for paradise that features throughout the works of W. B. Yeats and Ezra Pound. Yeats and Pound define poetry in terms of paradise and paradise in terms of poetry, Pryor suggests, and these complex interconnections fundamentally shape the development of their art. Even as he maps the shared influences and intellectual interests of Yeats and Pound, and highlights those moments when their poetic theories converge, Pryor's discussion of their poems' profound formal and conceptual differences uncovers the distinctive ways each writer imagines the divine, the good, the beautiful, or the satisfaction of desire. Throughout his study, Pryor argues that Yeats and Pound reconceive the quest for paradise as a quest for a new kind of poetry, a journey that Pryor traces by analysing unpublished manuscript drafts and newly published drafts that have received little attention. For Yeats and Pound, the journey towards a paradisal poetic becomes a never-ending quest, at once self-defeating and self-fulfilling - a formulation that has implications not only for the work of these two poets but for the study of modernist literature.

Sean Pryor is Lecturer in Poetry and Poetics at the University of New South Wales, Australia.

’... this lively and sensitive book has much to commend it. It is learned and to the point in situating the problems and solutions of Yeats and Pound in the context of the nineteenth-century crisis of faith, and in the process has some acute points to make about Wordsworth’s Excursion, Coleridge’s ’Kubla Khan’, and Keats’s Endymion... The book is also good at close reading, astutely interrogating the implications of phrase and word-choice. It offers some fascinating insights into the composition of some of the finest works of each poet by having frequent recourse to manuscript dramas.’ Modern Language Review 'Scholars of Yeats and Pound [...] should find much that is genuinely original, stimulating, thought-provoking and convincing in his acts of reading.' Review of English Studies 'Sean Pryor’s book is an essential contribution to both Yeats and Pound scholarship, but also to Modernist studies in general. Although his study does not make it explicit, the discussion of Yeats’s writings convincingly show that this poetic quest is more part of the Modernist struggle with epistemology that is commonly assumed... As a final note of praise, it should be stated that this well-argued study is written in a clear and jargon-free style, which makes for much enjoyable and enlightening (paradisal) reading.' Irish Studies Review 'This is an excellent book, for it manages to articulate Yeats’ and Pound’s compulsive urge to repeat a poetry of paradise without ever leaving the nuances of that poetry behind - without ever, that is, succumbing to the critical temptation to paraphrase the thinking done in these poems in ’ergotistical’ prose (to use a Poundian adjective). By means of this act of fidelity, Pryor captures both the complexity and the freshness of Yeats’ and Pound’s struggle to transpose paradise into verse.' Literature and Theology 'Pryor’s chief strength as a reader of Yeats and Pound is an exemplary sensitivity to how qualified, tenta

W.B. Yeats, Ezra Pound, and the Poetry of Paradise