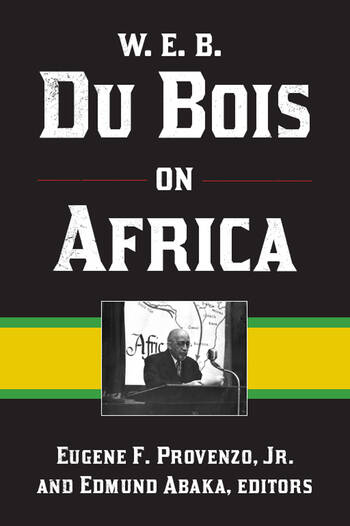 W. E. B. Du Bois is arguably the most important Black intellectual of the twentieth century and among the most important intellectual figures in modern African social thought. One of the founders of Pan-Africanism and a key figure in the postwar African liberation movement, he was champion of Africa and its people throughout his life. Despite this fact, his work on Africa has been underemphasized in scholarly writing about him. This book brings together for the first time Du Bois’s writings on Africa from the beginning of the twentieth century to his death in the early 1960s. Including over 50 magazine and journal articles, poems and book chapters, the works included in this volume clearly show not only Du Bois’s genius as a writer, but his profound understanding of how the quest for racial equality involved all of the people of African origin who suffered under colonial rule in Africa and in the Black disapora. The editors include a historical introduction, headnotes and a bibliography of Du Bois’s work on Africa.

Preface Introduction,  To The Nations of the World,  The Color Line, Belts the World, A Day in Africa, The First Universal Races, Congress ,Africa, The African Roots of the War, The Negro's Fatherland,  The Future of Africa, Africa, French And Spanish Race,  PridePan Africa, To The World, A Second Journey to Pan-Africa, Africa for the Africans, Back to Africa, On Migrating to Africa, Kenya Africa: January 1, 1924, African Manners, The Place, the People, Italy and Abyssinia, Liberia, The Pan African Congresses, Africa-Its Place in Modern History, The Rape of Africa, What is Africa to Me? The Disenfranchised Colonies, On Britain And Africa, The Saga of Nkrumah, A Future for Pan Africa: Freedom, Peace, Socialism, The Prime Minister Of Ghana, A Review Of Ghana: The Autobiography Of Kwame Nkrumah, The Future of Africa, Address to the All African People's Conference, Accra, China and Africa, The Belgian Congo, The World Must Soon Awake to Bar War in Congo, A Logical Program for a Free Congo, Nigeria Becomes Part of the Modern World, What Future for Nigeria, American Negroes and Africa's Rise to Freedom, A Second Journey to Pan Africa, The African Roots of the War, The Negro's Fatherland, Pan-Africa and New Racial Philosophy, The Future of World Democracy, Introduction of Kwame Nkrumah at the United Nations 1954, Suez Ghana Calls, Report to the Ghana Academy of Science, Bibliography of W.E.B. Du Bois's Writings on Africa.