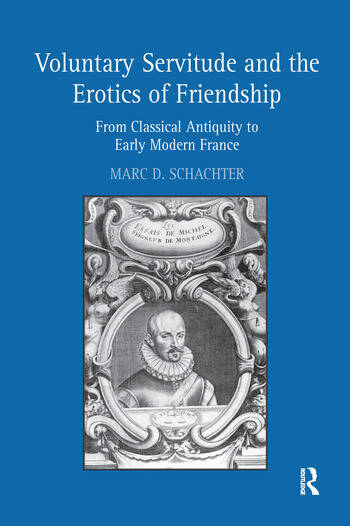 Voluntary Servitude and the Erotics of Friendship: From Classical Antiquity to Early Modern France

Focusing primarily on three early modern French authors, this book explores the erotics and politics of "voluntary servitude" in classical antiquity and the early modern period. These authors-Ã‰tienne de La Boétie, Michel de Montaigne, and Marie de Gournay-pursue related inquiries into voluntary servitude and self-control in marriage, friendship, pederasty and politics. Marc Schachter shows how Montaigne's intimate textual relationship with La Boétie provides him the opportunity to honor his beloved friend while transforming many of his ideas. Similarly, Marie de Gournay's editorial voluntary servitude to Montaigne provides her the occasion to authorize her own practice as a woman author and to engage critically with Montaigne's ideas even as she celebrates her friendship with him. Schachter's analyses are pursued particularly through the lens of Michel Foucualt's concept of governmentality which, like voluntary servitude, operates on three interrelated scales: self-control, control in interpersonal relationships, and political control. Schachter argues that thinking about the function of voluntary servitude through the lens of governmentality leads to a more nuanced understanding both of Foucault's late work and of the transformational possibilities offered by friendship and voluntary servitude in early modern France.

'Marc Schachter is unrivaled in his command of the classical and early modern texts on friendship, on sexuality, and on politics, his knowledge of the critical material on these texts, and the subtle but masterful way in which he brings all of these elements together in a profoundly original argument.' Kathleen Long, Cornell University, USA ’... an impressive and masterful study, at once erudite and innovative, focused in terms of the material discussed but wide-ranging in its implications. Not only will it be essential reading for all scholars of La Boétie, Montaigne and Gournay, it also has much to offer those interested in the friendship tradition, the history of sexuality, and political theory more generally, and in the highly fraught boundaries and intersections between them.’ Renaissance Quarterly

Voluntary Servitude and the Erotics of Friendship: From Classical Antiquity to Early Modern France