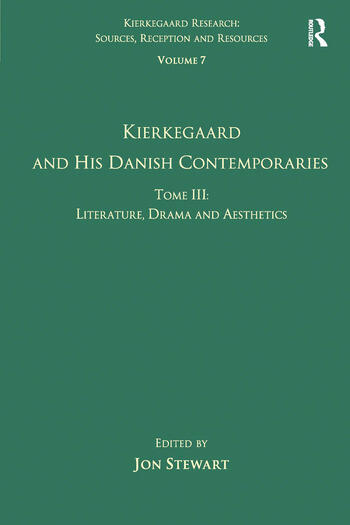 The period of Kierkegaard's life corresponds to Denmark's "Golden Age," which is conventionally used to refer to the period covering roughly the first half of the nineteenth century, when Denmark's most important writers, philosophers, theologians, poets, actors and artists flourished. Kierkegaard was often in dialogue with his fellow Danes on key issues of the day. His authorship would be unthinkable without reference to the Danish State Church, the Royal Theater, the University of Copenhagen or the various Danish newspapers and journals, such as The Corsair, FÃ¦drelandet, and KjÃ¸benhavns flyvende Post, which played an undeniable role in shaping his development. The present volume features articles that employ source-work research in order to explore the individual Danish sources of Kierkegaard's thought. The volume is divided into three tomes in order to cover the different fields of influence. Tome III is dedicated to the diverse Danish sources that fall under the rubrics "Literature, Drama and Aesthetics." The Golden Age is known as the period when Danish prose first established itself in genres such as the novel; moreover, it was also an age when some of Denmark's most celebrated national poets flourished. Accordingly, this tome contains articles on Kierkegaard's use of the great Danish poets and prose writers, whose works are frequently quoted and alluded to throughout his writings. Kierkegaard regularly attended dramatic performances at Copenhagen's Royal Theater, which was one of Europe's leading playhouses at the time. In this tome his appreciation for the art of Denmark's best-known actors and actresses is traced. Finally, this tome features articles on the leading literary critics and aesthetic theorists of the Golden Age, who served as foils for Kierkegaard's own ideas.