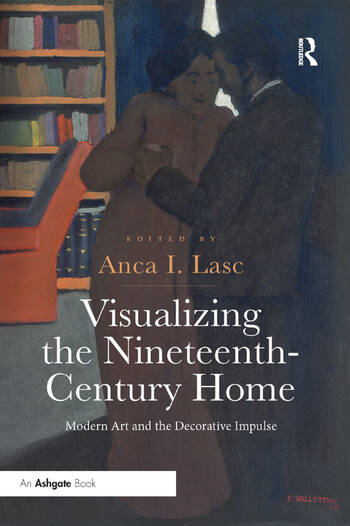 Visualizing the Nineteenth-Century Home: Modern Art and the Decorative Impulse

The nineteenth century - the Era of the Interior - witnessed the steady displacement of art from the ceilings, walls, and floors of aristocratic and religious interiors to the everyday spaces of bourgeois households, subject to their own enhanced ornamentation. Following the 1863 Salon des refuses, the French State began to channel mediocre painters into the decorative arts. England, too, launched an extensive reform of the decorative arts, resulting in more and more artists engaged in the production and design of complete interiors. America soon followed. Present art historical scholarship - still indebted to a modernist discourse that sees cultural progress to be synonymous with the removal of ornament from both utilitarian objects and architectural spaces - has not yet acknowledged the importance of the decorative arts in the myriad interior spaces of the 1800s. Nor has mainstream art history reckoned with the importance of the interior in nineteenth-century life and thought. Aimed at an interdisciplinary audience, including art and design historians, historians of the modern interior, interior designers, visual culture theorists, and scholars of nineteenth-century material culture, this collection of essays studies the modern interior in new ways. The volume addresses the double nature of the modern interior as both space and image, blurring the boundaries between arts and crafts, decoration and high art, two-dimensional and three-dimensional design, trompe-l'oeil effects and spatial practices. In so doing, it redefines the modern interior and its objects as essential components of modern art.

At Home, in the Nineteenth Century: Modern Art and the Decorative Impulse
Anca I Lasc

The Modern Interior as Space

3 A Humbug Home: An Examination of the Model Cottage at the Great Exhibition of 1851
Edward Hollis

5 The Novelist and the Artist: Rachilde, Félix Vallotton, and Shared Strategies in the Representation of the Decadent Interior
Georgina Downey

: The Modern Interior as Image

'The twenty-seven lively essays in these two volumes celebrate the interior as an archetypal artifact of Modernism while penetrating its enduring, and often conflicting, complexities. Written by international scholars from a range of disciplines, they also demonstrate just how far scholarship on the interior has come in the last thirty years.'

'Innovative in its contribution to visual culture studies, this book offers valuable and new perspectives on the modern interior of the late nineteenth-century vis a vis the history of art. It is a fascinating read, which has an energy both to the parts, and to the book overall.'

'The essays gathered together in this volume demonstrate the ways in which the domestic interior was central to the development of modern art. They explore the parameters of the traditional divide between the public sphere and the private interior, pushing at the boundaries of each in productive ways. The range of new perspectives establish the widespread concern with and popularity of the domestic interior in the nineteenth century. The interior emerges as a microcosm, or, in the words of Walter Benjamin, a ‘phantasmagoria,’ of aesthetics, imagination, nationalism, and modernity.'

'This interdisciplinary volume convincingly argues that the domestic interior played a vital role in the development of modern art. Extending the definition of fine art to private decorating practices and their representation, these engaging essays chronicle the importance of the home for nineteenth-century artists, collectors, critics, tourists, and businesses.'

Visualizing the Nineteenth-Century Home: Modern Art and the Decorative Impulse