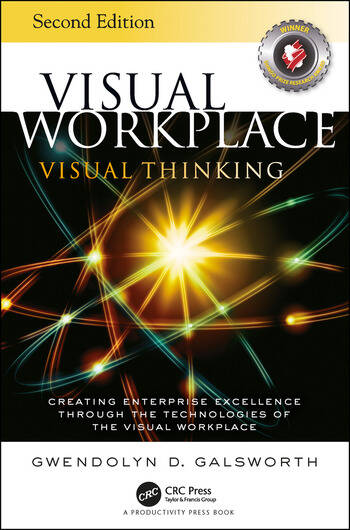 Visual Workplace/Visual Thinking (VWVT) was written by the acknowledged leading expert in workplace visuality. While other books touch upon visual workplace tools and practices, no other author has addressed the topic with the clarity and depth presented here. This is a seminal book, considered by many the definition of the field itself. First published by a small, independent press in 2005, the book won the prestigious Shingo Research Prize in the same year.

It was then and remains the only book of its kind that describes the conceptual and practical foundation for workplace visuality, derived from dozens of hands-on implementations in some of the world’s best or most challenging companies. Written not by an academic, but by a hands-on practitioner who has worked for three decades with companies in various phases of visual transformation, the work carries the reader from the usual starting point of 5S through to the full power of the visual-lean® alliance.

The book’s 11 chapters are in four sections. The first defines the visual workplace in relation to operational excellence, along with the eight building blocks of visual thinking. The next section, which targets the cultural conversion, is unexpectedly thrilling as it describes the genuine transformation of both company and employee which is at the heart of every visual conversion. Section 3 maps the logic and sequence of Dr. Galsworth’s 10-Doorway template as you learn about the visual side of 5S, visual standards, visual scheduling, visual material control, visual metrics, visual problem-solving, visual leadership as well as the visual machine® and visual-lean®office.

The final section of VTVW places visual management within the visual continuum, shows you how to use the ten doorways to assess your own company, and concludes with a discussion of the visual-lean alliance, illustrated through a conversion case study.

With over 25 full-color albums of visual solutions, 50+ graphs and charts, a detailed table of contents and in-depth Index, this 277-page book positions the technologies of the visual workplace as a premier improvement strategy on every company’s journey to operational excellence.

For more than 30 years, Gwendolyn Galsworth, PhD, has researched and developed the knowledge and know-how that defines the unique contribution that the visual workplace makes to the field of operational enterprise excellence and sustainable cultural and bottom line results.

"Galsworth is the world’s foremost authority on visual management. Her book raises the stature of visuality, hardens soft notions about it, and embeds it in structure and theory that—until now—have been missing."

"Dr. Galsworth continues to produce work in perfect harmony with The Shingo Prize model, with visual concepts, tools, and methods that are essential as companies pursue operational excellence."

"I’ve been a student of management for 30 years, read countless management books and gone to innumerable conferences. I have never found a better, more powerful system of transformation than Galsworth’s. This comes through on every page of her books. She does that better than anybody."