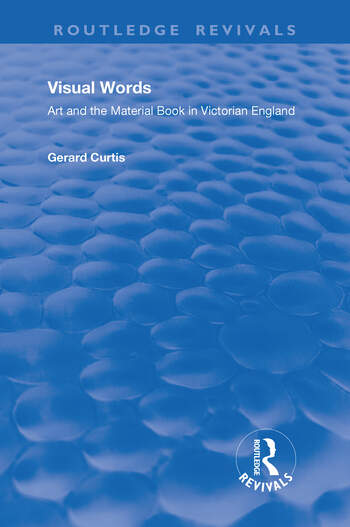 Visual Words: Art and the Material Book in Victorian England

First Published in 2002,  Visual Words provides a unique and interdisciplinary evaluation of the relationship between images and words in this period.Victorian England witnessed a remarkable growth in literacy culminating in the new literary nationalism that emerged at the beginning of the twentieth century. Each chapter explores a different aspect of this relationship: the role of Dickens as the heroic author, the book as an iconic object, the growing graphic presence of the text, the role of the graphic trace, the ’Sister Arts/ pen and pencil’ tradition, and the competition between image and word as systems of communication. Examining the impact of such diverse areas as advertising, graphic illustration, narrative painting, frontispiece portraits, bibliomania, and the merchandising of literary culture, Visual Words shows that the influence of the ’Sister Arts’ tradition was more widespread and complex than has previously been considered. Whether discussing portraits of authors, the uses of iconography in Ford Madox Brown’s painting Work, or examining why the British Library was equipped with false bookcases for doors, Gerard Curtis looks at artistic and literary culture from an art historical and ’object’ perspective to gain a better understanding of why some Victorians called their culture ’hieroglyphic’.

Contents: Introduction; Shared lines: pen and pencil as trace; The hieroglyphic image; The art of seeing: Dickens in the visual market; Portraits of the author; The empty biscuit tin; Conclusion; Select bibliography; Index.

Gerard Curtis is Associate Professor of Art History in the Programme of Visual Arts at Memorial University of Newfoundland, Canada.

’a highly original, even brilliant study, which I have much enjoyed reading’ Stephen Bann, University of Bristol, UK. '... a noteworthy contribution to the discussion of Victorian visual culture...' Literatur in Wissenschaft under Unterricht 'Ashgate are to be congratulated for keeping faith with the various interrelated subjects of prints, publishing and illustration, and other issues of the graphic in relation to art and culture... Curtis offers revealing insights and new views of English pictorial culture which expand the conventions of art historical study of the Victorian period.' The Art Book '... this study offers many rich insights into a wide range of visual/verbal topics and is a welcome addition to image/text studies and to the scholarship on the book in Victorian visual culture.' Lorraine Janzen Kooistra, Journal of Pre-Raphaelite Studies '... a well-written and cogent study that should appeal to art historians and literary historians alike... this book is highly recommended..' Libraries and Culture '... offers a detailed genealogy and history of the way in which the Victorians imagined and reimagined the book and its text as a concrete visual and cultural object... As a sourcebook, it is invaluable to anyone researching Victorian visual culture, and Curtis has performed a significant service in bringing together such a rich array of objects and texts.' Daniel Novak, Victorian Studies

Visual Words: Art and the Material Book in Victorian England