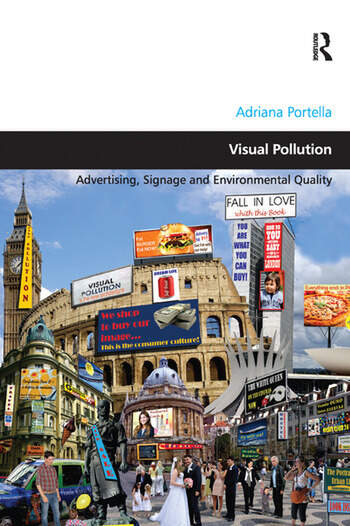 In recent years, there has been considerable interest in the problems that public spaces face because of the design of commercial signs. The negative consequences that commercial signs can have on the visual quality of urban areas and further more, on people's quality of life, has been studied from both architectural, planning and psychological perspectives. While the issue of visual pollution, as this phenomenon is commonly described, has been widely debated, there is as yet no clear conclusion as to how best to control commercial signage and whether different urban contexts and people from different backgrounds and cultures have universal or distinct preferences. Several different commenrcial signage approaches are currently applied to different historic cities, but these initiatives are not based on principles derived from the perception and evaluation of users. Drawing on a range of comparative and contrasting empirical studies of historic city centres in the UK and Brazil, this book examines questions of commercial signage control management, the preservation of historic heritage and user preference and satisfaction. The author takes an environment behaviour approach to this research, involving theories, concepts and methodologies related to environmental psychology, architecture, planning and urban design. In doing so, it argues that there are in fact visual preferences common to the majority of people, independent of their urban context and that these common views can be useful to the development of a general theory of how to control commercial signage. In conclusion, the book suggests that the best way of controlling signage is not only to recommend general guidelines related to the operation of commercial signage, but also to recommend design principles that can create commercial streetscapes evaluated positively by different users.

Adriana Portella is based at the University College London in The Bartlett School of Planning, UK.

’Visual Pollution is both an exemplary and rare text in the fields of urban design and environmental perception, focusing as it does on a highly topical and important issue in built environment studies: the aesthetic experience of users, and how their appreciation of urban beauty can be measured’. Alan Reeve, Oxford Brookes University, UK The book succeeds in finding a set of recommendations to enhance the visual quality of city centres, useful for urban planners, civil engineers, architects, and lawmakers ... another strength of the book is the extensive background information provided about theories of perception and cognition of the built environment, legal frameworks to control commercial signage, and the forces shaping the visual quality of public space, such as consumer culture and city centre management and promotion. LSE Review of Books