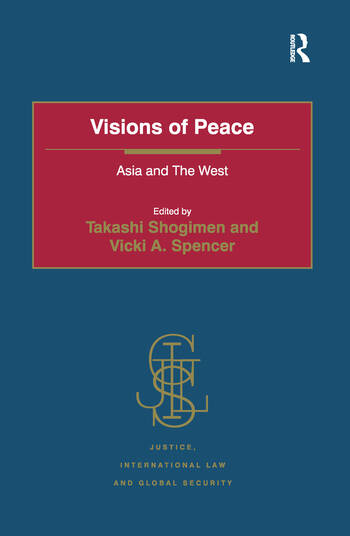 Visions of Peace: Asia and The West

Visions of Peace: Asia and the West explores the diversity of past conceptualizations as well as the remarkable continuity in the hope for peace across global intellectual traditions. Current literature, prompted by September 11, predominantly focuses on the laws and ethics of just wars or modern ideals of peace. Asian and Western ideals of peace before the modern era have largely escaped scholarly attention. This book examines Western and Asian visions of peace that existed prior to c.1800 by bringing together experts from a variety of intellectual traditions. The historical survey ranges from ancient Greek thought, early Christianity and medieval scholasticism to Hinduism, classical Confucianism and Tokuguwa Japanese learning, before illuminating unfamiliar aspects of peace visions in the European Enlightenment. Each chapter offers a particular case study and attempts to rehabilitate a 'forgotten' conception of peace and reclaim its contemporary relevance. Collectively they provide the conceptual resources to inspire more creative thinking towards a new vision of peace in the present. Students and specialists in international relations, peace studies, history, political theory, philosophy, and religious studies will find this book a valuable resource on diverse conceptions of peace.

Takashi Shogimen is Associate Professor in History and Associate Dean (Research) for Humanities at the University of Otago, Dunedin, New Zealand. He has previously been Research Fellow, Clare Hall, Cambridge, and a Visiting Professor in History at the University of Helsinki. His research interests encompass medieval European political thought, comparative political theory and Japanese intellectual history. His publications include Ockham and Political Discourse in the Late Middle Ages (Cambridge University Press, 2007) and Western Political Thought in Dialogue with Asia (co-edited with Cary J. Nederman, Lexington Books, 2009). Vicki A. Spencer is a Senior Lecturer in political theory in the Department of Politics at the University of Otago, Dunedin, New Zealand. Her research interests encompass early modern European thought and contemporary political theory with a focus on issues relating to language, cultural identities, nationalism and multiculturalism. She is the co-editor (with Paul Corcoran) of Disclosures (Ashgate, 2000) and her most recent publication is Herder’s Political Thought: A Study of Language, Culture and Community (University of Toronto Press, 2012). She is currently working on a project in contemporary theory on toleration, humility and recognition.

’This is an insightful and much needed exploration of diverse understandings of peace, drawing from rich cross-cultural and historical sources to inspire more imaginative and effective strategies for preventing war.’ David Cortright, University of Notre Dame, USA ’The emphasis is on the under-explored ideas of peace found in the moral and political philosophies of Asia and the West. While each chapter stands on its own, the volume as a whole, in its historic sweep and philosophic depth, leaves an indelible impression on the reader. A much needed addition to the existing literature on peace studies.’ Anthony Parel, University of Calgary, Canada

Visions of Peace: Asia and The West