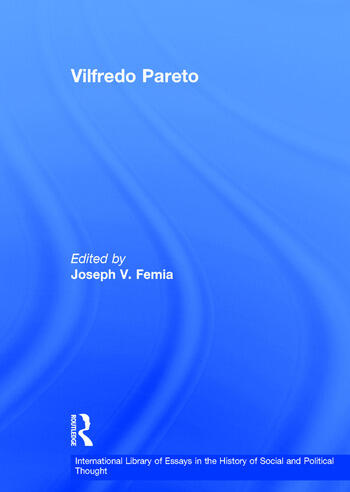 This collection examines the work of the Italian economist and social theorist Vilfredo Pareto, highlighting the extraordinary scope of his thought, which covers a vast range of academic disciplines. The volume underlines the enduring and contemporary relevance of Pareto's ideas on a bewildering variety of topics; while illuminating his attempt to unite different disciplines, such as history and sociology, in his quest for a 'holistic' understanding of society. Bringing together the world's leading experts on Pareto, this collection will be of interest to scholars working in the fields of sociology and social psychology, monetary theory and risk analysis, philosophy and intellectual history, and political science and rhetoric.

'Pareto's contributions to economics, sociology and political science are well known to specialists in these different fields, but the relations between them as part of a more general theory of social science is far less appreciated. By exploring how his work crossed these disciplinary boundaries, this collection of chapters moves us towards a fuller and better understanding of the writings of this key figure.' Richard Bellamy, University College, London, UK 'I would urge prospective students of Pareto - which this book might well cause to increase - to begin their study with Giorgio Baruchello’s chapter on Pareto’s rhetoric, there being nothing else like it in English. Pareto was a great polemicist, and until his special use of language is appreciated, the full weight of his achievement cannot be comprehended or enjoyed to the extent it should be. American scholars will find refreshingly instructive the chapters by their countrymen, FranÃ§ois Neilsen (on stratification research), Charles Power (on social systems), and John Higley (elite cycles), since so little reference is made to Pareto nowadays in sociology. Given the high quality of their work, and that of others in this densely constructed book, this avoidance of Pareto’s obvious genius seems increasingly irresponsible...' Contemporary Sociology