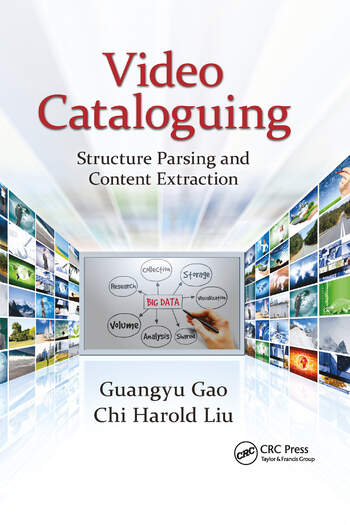 The arrival of the digital age has created the need to be able to store, manage, and digitally use an ever-increasing amount of video and audio material. Thus, video cataloguing has emerged as a requirement of the times. Video Cataloguing: Structure Parsing and Content Extraction explains how to efficiently perform video structure analysis as well as extract the basic semantic contents for video summarization, which is essential for handling large-scale video data.

The book lists and introduces some of the most commonly used features in video analysis. It introduces and analyzes the most popular shot boundary detection methods and also presents recent research on movie scene detection as another important and critical step for video cataloguing, video indexing, and retrieval.

The authors propose a robust movie scene recognition approach based on a panoramic frame and representative feature patch. They describe how to recognize characters in movies and TV series accurately and efficiently as well as how to use these character names as cataloguing items for an intelligent catalogue.

The book proposes an interesting application of highlight extraction in basketball videos and concludes by demonstrating how to design and implement a prototype system of automatic movie and teleplay cataloguing (AMTC) based on the approaches introduced in the book.

Guangyu Gao is an assistant professor at the School of Software, Beijing Institute of Technology, China. He earned his PhD degree in computer science and technology from the Beijing University of Posts and Telecommunications, China, in 2013, and his MS degree in computer science and technology from Zhengzhou University, Henan Province, China, in 2007. He was also a government-sponsored joint PhD student at the National University of Singapore, from July 2012 to April 2013. His current research interests include applications of multimedia, computer vision, video analysis, machine learning, and Big Data.

As an author, he received the Electronic Information and Science Technology Prize, awarded by the Chinese Institute of Electronics. He has published dozens of prestigious conference and journal papers and is a member of both the Association for Computing Machinery and the China Computer Federation.

Chi Harold Liu is a full professor at the School of Software, Beijing Institute of Technology, China. He is also the director of the IBM Mainframe Excellence Center (Beijing), the IBM Big Data Technology Center, and the National Laboratory of Data Intelligence for China Light Industry. He holds a PhD degree from Imperial College, London, UK, and a BEng degree from Tsinghua University, Beijing, China. Before moving to academia, he joined IBM Research–China as a staff researcher and project manager, after working as a postdoctoral researcher at Deutsche Telekom Laboratories, Berlin, Germany, and a visiting scholar at IBM T. J. Watson Research Center, Hawthorne, New York.

His current research interests include the Internet-of-Things (IoT), Big Data analytics, mobile computing, and wireless ad hoc, sensor, and mesh networks. He received the Distinguished Young Scholar Award in 2013, IBM First Plateau Invention Achievement Award in 2012, and IBM First Patent Application Award in 2011 and was interviewed by EEWeb.com as the featured engineer in 2011. He has published more than 60 prestigious conference and journal papers and owned more than 10 EU/U.S./China patents.