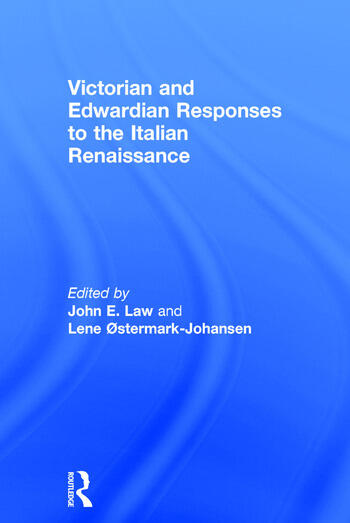 Victorian and Edwardian Responses to the Italian Renaissance

The historiography of the Italian Renaissance has been much studied, but generally in the context of a few key figures. Much less appreciated is the extent of the enthusiasm for the subject in the 19th and early 20th centuries, when the subject was 'discovered' by travellers and men and women of letters, historians, artists, architects and photographers, and by collectors on both sides of the Atlantic. The essays in Victorian and Edwardian Responses to the Italian Renaissance explore the breadth of the responses stimulated by the encounter between the British, the Americans and the Italians of the Renaissance. The volume approaches the subject from an interdisciplinary perspective. While recognising the abiding importance of the familiar 'great names', it seeks to draw attention to a wider cast of people, many of whom led colourful, energetic lives, knew Italy well, and wrote eloquently about the country and its Renaissance. Several essays show that 'Renaissance studies' became a field in which female historians could explore areas of relevance to the 'New Woman'. Other chapters examine the aims and politics of collecting and the place of the collector in literature and in the rediscovery of Renaissance artists. The contribution of teachers and other less formal champions of the Italian Renaissance is explored, as is the role of photographers who re-framed and re-viewed Florence - the Renaissance city - for Victorian and later eyes.

John E. Law is Reader in the Department of History at the Swansea University, UK.

Dr Lene Østermark-Johansen lectures on Victorian art and literature in the Department of English at the University of Copenhagen, Denmark.

'It successfully argues for the enduring influence of the late-Victorian period in shaping our own canons of the art and mentality of the Italian renaissance, and it makes a convincing case for redressing the ingrained modernist bias in twentieth-century art criticism against the prolific work of writers such as Ruskin, Pater, Symonds, and Lee, which is still often dismissed as amateurish, "purple", and unscholarly.' Victorian Studies

’... it is a cogent and wide-ranging collection that develops our understanding of the ways in which the idea of the Renaissance was invented in the nineteenth century.’ The Year’s Work in Critical and Cultural Theory

’... by adopting a methodology that embraces biography, politics, economic history, material culture, feminism, and curricular developments in higher education, it makes a significant contribution to Italian Renaissance scholarship... Victorian and Edwardian Responses to the Italian Renaissance is an academic "must read" not only for those with a particular interest in this time period, but also for graduate students who are being introduced to methodology. This volume is an excellent example of how to direct a scholar's attention to the importance of archival research and historiography.’ Nineteenth-Century Art Worldwide

Victorian and Edwardian Responses to the Italian Renaissance