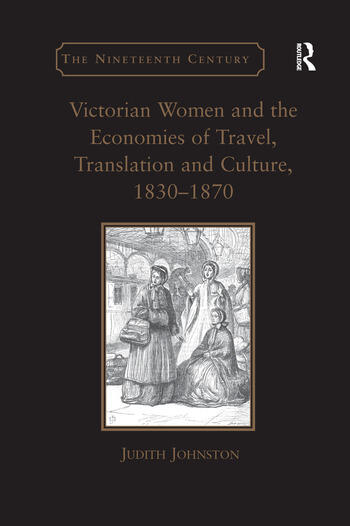 Victorian Women and the Economies of Travel, Translation and Culture, 1830–1870

Both travel and translation involve a type of journey, one with literal and metaphorical dimensions. Judith Johnston brings together these two richly resonant modes of getting from here to there as she explores their impact on culture with respect to the work of Victorian women. Using the metaphor of the published journey, whether it involves actual travel or translation, Johnston focusses particularly on the relationships of various British women with continental Europe. At the same time, she sheds light on the possibility of appropriation and British imperial enhancement that such contact produces. Johnston's book is in part devoted to case studies of women such as Sarah Austin, Mary Busk, Anna Jameson, Charlotte Guest, Jane Sinnett and Mary Howitt who are representative of women travellers, translators and journalists during a period when women became increasingly robust participants in the publishing industry. Whether they wrote about their own travels or translated the foreign language texts of other writers, Johnston shows, women were establishing themselves as actors in the broad business of culture. In widening our understanding of the ways in which gender and modernity functioned in the early decades of the Victorian age, Johnston's book makes a strong case for a greater appreciation of the contributions nineteenth-century women made to what is termed the knowledge empire.

’... an authoritative study of an important area of women’s participation in the profession of writing, engagingly written and persuasively argued. It makes a timely and effective intervention in current critical debates about translation and travel literature, and broadens our understanding of Britain’s interactions with other nations and cultures in the nineteenth century.' Hilary Fraser, Birkbeck University of London, UK 'Victorian Women and the Economies of Travel, Translation and Culture is valuable reading, offering detailed insights into the works of women writers with whom many will be less familiar, while the broader contexts of Johnston’s argument extend beyond these case studies to have much wider implications for thinking about the ways in which women’s writing was working to shape out new cultural debates in the period.' Feminist and Women’s Studies Associations Victorian Women and the Economies of Travel is very clear, easy to handle and research into with a rich fifteen-page bibliography and index ... this book is an excellent read for anyone interested in translation and women's writing in general or in one of the female translators studied in more depth.' Cahiers Victoriens et Edouardiens 'This rich study will be of particular interest to nineteenth-century English scholars, and researchers into gender, translation, travel writing and periodical culture, but will also be of interest to nineteenth-century Germanists particularly interested in the reception history of German literature in Britain.' Archiv fur das Studium der neueren Sprach und Literaturen 'Johnston's work is a stimulating read likely to prove of considerable interest to book historians keen to explore the many ways in which women contributed to the rapidly expanding knowledge industry in the nineteenth century.' SHARP News 'Johnston's re-evaluation of critically neglected writers, particularly her establishment of a female intellectual and economic network of exchang

Victorian Women and the Economies of Travel, Translation and Culture, 1830–1870