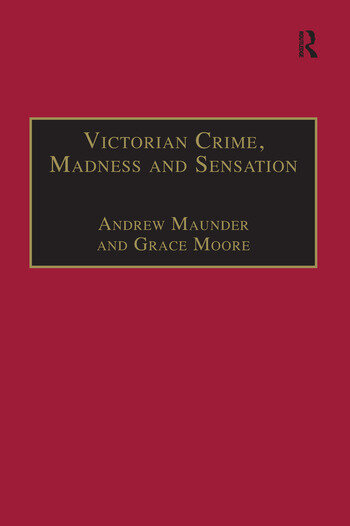 Beginning with Victoria's enthronement and an exploration of sensationalist accounts of attacks on the Queen, and ending with the notorious case of a fin-de-siècle killer, Victorian Crime, Madness and Sensation throws new light on nineteenth-century attitudes toward crime and 'deviance'. The essays, which draw on both canonical and liminal texts, examine the Victorian fascination with criminal psychology and pathology, engaging with real life cases alongside fictional accounts by writers as diverse as Ainsworth, Stevenson, and Stoker. Among the topics are shifting definitions of criminality and the ways in which discourses surrounding crime changed during the nineteenth century, the literal and social criminalization of particular sex acts, and the gendering of degeneration and insanity. As fascinated as they were with criminality, the Victorians were equally concerned with solving crime, and this collection also focuses on the forces of law enforcement and nineteenth-century attempts to "read" the criminal body as revealed in Victorian crime fiction and reportage. Contributors engage with the detective figure and his growing professionalization, while examining the role of science and technology - both at home and in the Empire - in solving cases.

Contents: Introduction, Andrew Maunder & Grace Moore; Regicide and reginamania: G.W.M. Reynolds and The Mysteries of London, John Plunkett; The making of a master criminal: the 'chief of the thugs' in Victorian writings on crime, MÃ¡ire nÃ­ FhlathÃºin; Black markets and cadaverous pies: the corpse, urban trade and industrial consumption in the Penny Blood, Sally Powell; 'Stepchildren of nature': East Lynne and the spectre of female degeneracy, 1860-61, Andrew Maunder; Murder, gender, and popular fiction by women in the 1860s: Braddon, Oliphant, Yonge, June Sturrock; Anatomy of a 'nine days' wonder': sensational journalism in the decade of the sensation novel, Dallas Liddle; The inside story: crime, convicts, and careers for women, Barbara Onslow; 'The truth of midnight' and 'The truth of noonday': sensation and madness in James Thomson's The City of Dreadful Night, Dafydd Moore; Puffed papers and broken promises: white-collar crime and literary justice in The Way We Live Now, Karen Odden; Something to Hyde: the 'strange preference' of Henry Jekyll, Grace Moore; The novelization of the Dreyfus Affair: femininity and sensation in fin-de-siècle France, Christopher E. Forth; 'Furious passions of the Celtic race': Ireland, madness and Wilkie Collins's Blind Love, Maria K. Bachman; Time's hand: fingerprints, empire, and Victorian narratives of crime, Gita Panjabi Trelease; Vamping the children: the 'Bloofer Lady', the 'London Minotaur' and child-victimization in late 19th-century England, Leslie Ann Minot; Ballad of a demon barber: the criminal career of George Chapman, Nicholas Freeman; Bibliography; Index.

Andrew Maunder is senior lecturer in English at the University of Hertfordshire. He has written on the Cornhill Magazine, Christina Rossetti, Anthony Trollope and Mrs. Henry Wood. At present he is working on a study of Bram Stoker. Grace Moore is Lecturer in Literary Studies at the University of Melbourne, Australia. She wrote Dickens and Empire, also published by Ashgate.

'...a fascinatingly eclectic collection on the Victorians' fascination with crime and madness'. Lyn Pykett, Pro-Vice Chancellor and Professor of English, The University of Aberystwyth '... pleasingly provocative volume... rich and varied collection of essays.' TLS 'With its wide-ranging subject matter and its promise to throw new light on nineteenth-century attitudes to crime and deviance, this book will surely appeal to a wide range of nineteenth-century scholars. Even at such a richly laden table, the finest pieces stand out... The heart of this collection lies in its excellent treatment of gender. It is in this area that the book makes its most cogent and powerful case for itself. With almost half the essays devoted to some aspect of gender, Victorian Crime, Madness and Sensation makes a marvelous and important contribution to the field.' ELT 'This fascinating collection of essays traverses the century and ranges across Victorian criminal activity and social aberrance from regicide and serial number to sensation and child sexual abuse. Focusing on bodies, moral and physical decay, exploitative journalism and abusive commercialism, the collection never fails to be engaging... this carnival of Victorian deviance is a worthwhile read... The collection will be a useful tool for anyone interested in crime.' Victorian Studies ’... there are many essays of interest in this [...] very worthwhile volume.’ The Year's Work in English Studies