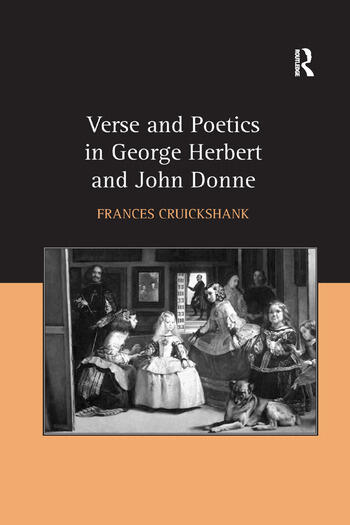 Verse and Poetics in George Herbert and John Donne

Innovative and highly readable, this study traces George Herbert's and John Donne's development of a distinct poetics through close readings of their poems, references to their letters, sermons, and prose treatises, and to other contemporary poets and theorists. In demonstrating a relationship between poetics and religious consciousness in Donne's and Herbert's verse, Frances Cruickshank explores their attitudes to the cultural, theological, and aesthetic enterprise of writing and reading verse. Cruickshank shows that Donne and Herbert regarded poetry as a mode not determined by its social and political contexts, but as operating in and on them with its own distinct set of aesthetic and intellectual values, and that ultimately, verse mattered as a privileged mode of religious discourse. This book is an important contribution to the ongoing scholarly dialogue about the nature of literary and cultural study of early modern England, and about the relationship between the writer and the world. Cruickshank confirms Donne's reputation as a fascinating and brilliant poetic figure while simultaneously rousing interest in Herbert by noting his unique merging of rusticity and urbanity and tranquility and uncertainty, allowing the reader to enter into these poets' imaginative worlds and to understand the literary genre they embraced and then transformed.

Contents: Introduction: poetry versus materialism; The soul in paraphrase: writing and reading the religious lyric; Taking figures: metaphor and theology in religious poetics; Green matter and the figure of the garden; The poetics of the Eucharist: poetry that matters; Conclusion; Works cited; Index.

Frances Cruickshank is a Visiting Fellow in the School of Cultural Inquiry at the Australian National University, Australia.

'In presenting her original, sympathetic, and erudite explications of selected poems by Herbert and Donne, Frances Cruickshank illustrates her understanding of the new aestheticism, a critical approach to the early modern religious lyric that she endorses as an escape from the lingering dominance of New Historicism. ... Cruickshank's study is artful and insightful.' Renaissance Quarterly 'Frances Cruickshank's monograph is a significant literary achievement for several reasons. It is firstly an important contribution to literary criticism of early modern poetry; although its focus is the poetry of John Donne and George Herbert, the arguments are relevant and applicable to scholarly work of their contemporaries. Secondly, the book is a carefully argued interrogation of our modes of literary criticism. ... The third dimension of the book's value is that it is beautifully and poetically written; it is the product of a unique scholarly mind giving words and ideas prolonged and deep thought. Every sentence has been carefully crafted, resulting in a monograph that is simply a joy to read. ... Cruickshank's is an innovative, original, and poetic new voice in the field and her first monograph deserves a wide readership.' Parergon 'Frances Cruickshank has written a necessary, rather daring, and (most importantly) very good book. Dealing with two masters of the short poetic form-the lyric-and encompassing a relatively few pages, her book nevertheless addresses large issues: the contributions and liabilities of cultural materialism, the power of beauty and art, the place of play and pleasure in literary experience, and the fate of the humanities themselves. ... Cruickshank’s little book, which narrowly-and learnedly-focuses on two special cases from late Tudor and early Stuart England, can be read to represent the power of all literary and artistic creations to resist reduction to mere manifestos.' Modern Philology

Verse and Poetics in George Herbert and John Donne