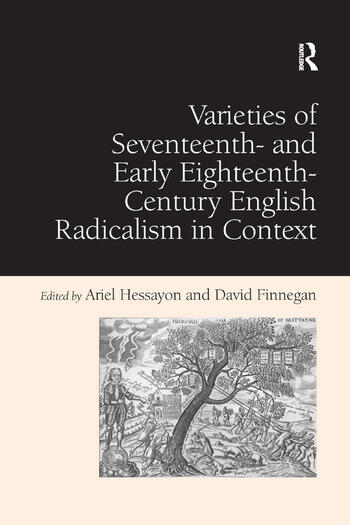 Varieties of Seventeenth- and Early Eighteenth-Century English Radicalism in Context

The essays in this collection explore a number of significant questions regarding the terms 'radical' and 'radicalism' in early modern English contexts. They investigate whether we can speak of a radical tradition, and whether radicalism was a local, national or transnational phenomenon. In so doing this volume examines the exchange of ideas and texts in the history of supposedly radical events, ideologies and movements (or moments). Once at the cutting edge of academic debate radicalism had, until very recently, fallen prey to historiographical trends as scholars increasingly turned their attention to more mainstream experiences or reactionary forces. While acknowledging the importance of those perspectives, Varieties of seventeenth- and early eighteenth-century English radicalism in context offers a reconsideration of the place of radicalism within the early modern period. It sets out to examine the subject in original and exciting ways by adopting distinctively new and broader perspectives. Among the crucial issues addressed are problems of definition and how meanings can evolve; context; print culture; language and interpretative techniques; literary forms and rhetorical strategies that conveyed, or deliberately disguised, subversive meanings; and the existence of a single, continuous English radical tradition. Taken together the essays in this collection offer a timely reassessment of the subject, reflecting the latest research on the theme of seventeenth-century English radicalism as well as offering some indications of the phenomenon's transnational contexts. Indeed, there is a sense here of the complexity and variety of the subject although much work still remains to be done on radicals and radicalism - both in early modern England and especially beyond.

'The scholarship on the intellectual, religious and political history of early modern England presents a large use of terms such as 'orthodox', 'deist', 'atheist', 'radical', and their respective 'isms'... This volume is among the most significant contributions to clarifying the meaning and significance of one of these terms, namely radicalism, which has proven to be a 'flexible' conceptual category.' Reviews in History 'The editors of this exceedingly useful and engaging volume, which brings together some important examples of recent research on radical movements between circa 1640 and circa 1832, place a unifying emphasis on defining and situating radicalism.' Journal of British Studies 'Ariel Hessayon and David Finnegan are to be congratulated on pulling together such as interesting set of essays. To be sure, they require attentive reading and much consideration, but this volume is well worth the attention of those who study the period.' 16th Century Journal '... the detail of the research that underpins these essays makes fascinating reading and casts a light into some very dark corners of this intellectually turbulent period.' North East History '... develops this revisionist view more fully by reviewing examples of English radical thought from the mid-seventeenth century to the early nineteenth century. The essays collectively inspire reconsideration of the nature of radicalism (and, by extension, all political ideologies) both in early modern England and thereafter.' The Historian 'These essays, ranging in subject from letter writing to building a personal library, provide an intimate and nuanced portrait of English radicalism from 1680 to 1730.' The Scriblerian 'The editors do a remarkable job at surveying definitions and approaches to radicalism... [the chapters] offer new perspectives on radicalism in the early eighteenth century' The Seventeenth Century

Varieties of Seventeenth- and Early Eighteenth-Century English Radicalism in Context