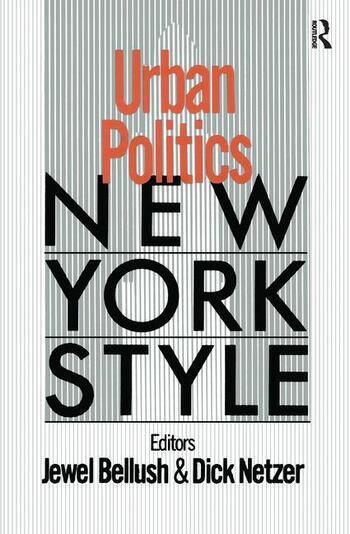 In many respects, New York City is an unnatural wonder, quite unlike any other American city and also unlike megacities in other industrial countries. Its government and politics, its physical attributes-like the celebrated skyline and high population density-and many of its social characteristics-like the extraordinarily high percentage of the city's population that is foreign-born-are different. But New York City at the same time shares with other American cities an array of political and governmental institutions, practices, traditions, and pressures, ranging from the long dominance and then long decline in the role of party organizations in local government to the city's ultimate dependence on outside actors and forces to shape its political destiny.

I. Overview: Chapter I New York Confronts Urban Theory Chapter 2 The Economy and the Governing of the City, II. Governance: Chapter 3 Changing Styles and Strategies of the Mayor, Chapter 4 The Other Elected Officials, Chapter 5 Bureaucracy: Power in Details, Chapter 6 Community Control and Decentralization, Chapter 7 Public Authorities and the Shape of Decision Making, III. The Dependent City: Chapter 8. The State/City Relationship, Chapter 9 The Federal Impact on City Politics IV. Politics: Chapter 10. The Withering Away of the Party System, Chapter 11. Clusters of Power: Interest Groups, Chapter 12. The Media in the Game of Politics, V. Demography as Politics: Chapter 13. Needed, More Foxes: The Black Experience, Chapter 14, New Immigrants: Ethnic Factors in Governance and Politics, VI. Epilogue: Chapter 15 The New Charter: Will It Make a Difference?