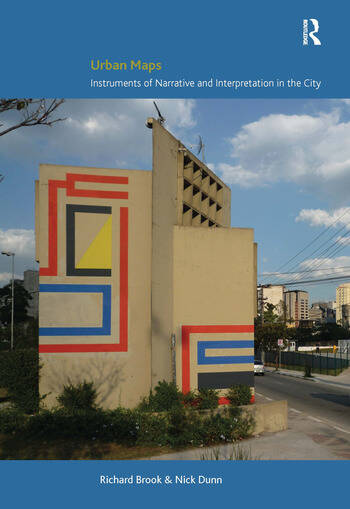 Urban Maps: Instruments of Narrative and Interpretation in the City

This book concerns the city and the 'devices' that define the urban environment by their presence, representation or interpretation. The texts offer an interdisciplinary discourse and critique of the complex systems, artifacts, interventions and evidences that can inform our understanding of urban territories; on surfaces, in the margins or within voids. The diverse media of arts practices as well as commercial branding are used to explore narratives that reveal latent characteristics of urban situations that conventional architectural inquiry is unable to do. The subjects covered are presented within a wider framework of urban theory into which are embedded case study examples that outline the practices, processes and interpretations of each theme. The chapters provide a contemporary reading of urban socio-cultural conditions using 'mapping' as a lens to explore and communicate the social phenomena and lived experiences of the dynamic and temporal city. Mapping is developed as a form of critical instrumentality to expose, record and contribute to the understanding of the singular essences of space, place and networks by thematic, cognitive and experiential modes of investigation.

'Urban Maps provides an interesting new way of "minding the gap" between the contemporary urban condition and architectural design. Calling on familiar and well-loved theoretical friends like Walter Benjamin, but also bringing in exciting new contenders such Thomas de Quincey, the narrators interrogate an interdisciplinary array of projects from graffiti to branded environments. The map is posited as a central element of design behaviour, and Brook and Dunn argue convincingly that to address today’s pressing urban issues architecture must move outside its normal frames of reference, and engage with a new vocabulary and conceptual framework comprising images, networks, films, marks and objects.' Jane Rendell, The Bartlett School of Architecture, UCL, UK, author of The Pursuit of Pleasure (2001), Art and Architecture (2006), Site-Writing (2010) 'Fifty years ago, Kevin Lynch offered us a classical reading of "the image of the city" based on a waning ideal of clear built landmarks and distinct urban signs. Now, through inspired insights and an in-depth inquiry into a vast array of contemporary urban practices, the authors of Urban Maps reveal to us how the complex narratives currently converging in the appropriation and redefinition of an eroded urban space require a totally revamped cognitive mapping... From the readings of cinema to the interventions of street art, from the markings of graffiti to the identities of brandscapes, and from the wanderings of contemporary art to the fictional drives of theory, architecture is confronted with the need to review the cartography of its references when facing the ascendancy of the urban condition - and the prominence of new networked, information-augmented realities - as substituting for previous conceptions of the city.' Pedro Gadanho, architect, curator and writer, Lisbon, Portugal 'This is an important contribution to the architectural and urban library, which advances the discussion on analyzing the urban condition i

Urban Maps: Instruments of Narrative and Interpretation in the City