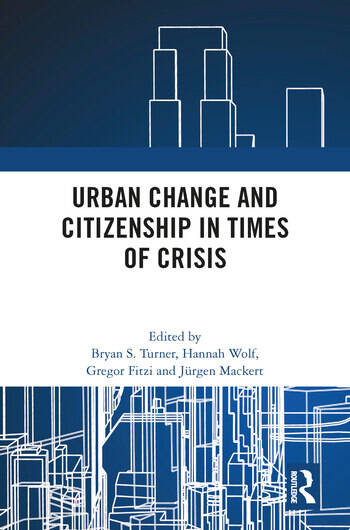 Urban Change and Citizenship in Times of Crisis: 3 Volume Set

Urban Change and Citizenship in Times of Crisis addresses the fact that in the beginning of the twenty-first century the majority of the world’s population is urbanized, a social fact that has turned cities more than ever into focal sites of social change. Multiple economic and political strategies, employed by a variety of individual and collective actors, on a number of scales, constitute cities as contested spaces that hold opportunities as well as restrictions for their inhabitants. While cities and urban spaces have long been of central concern for the social sciences, today, classical sociological questions about the city acquire new meaning: Can cities be spaces of emancipation, or does life in the modern city entail a corrosion of citizenship rights? Is the city the focus of societal transformation processes, or do urban environments lose importance in shaping social reality and economic relationships? Furthermore, new questions urgently need to be asked: What is the impact of different historical phenomena such as neo-liberal restructuring, financial and economic crises, or migration flows, as well as their respective counter-movements, on the structure of contemporary cities and on the citizenship rights of city inhabitants? The three volumes address such crucial questions thereby opening up new spaces of debate on both the city and new developments of urbanism.

Introduction: Cities between Success and Failure  Part 1: Philosophical and Historical Trajectories  1. The Good City and Its True Costs: Planetary Urbanisation Through an Aristotelian Lens  2. Sacred Cities: Ancient and Early Modern Religious Diversity  3. On Immigration and the Meanings of Urban Social Justice in Queens, NY  4. Successful Societies and Policy Discourse: A Meta-Political Engagement with Joan C. Williams’s White Working Class  Part 2: Urban Political Collectivities  5. Global Urbanism and the Crisis of Emancipation  6. Changing Political Collectivities in Times of Crisis: Tenant Protest in Berlin and New York  7. Urban Citizenship in Times of Gentrification  Part 3: Towards Urban Complexity and Social Quality  8. Urban Complexity and Urban Change : Co-Irritation, Co-Evolution and Co-Design with the Potsdam Lodestar Approach  9. ‘Social Quality’ and the City : A Qualitative Exploratory Comparison in the Cities of Lausanne and Zurich

Introduction: Urban Warfare: Neo-Liberalism’s Assault on Democratic Life in the City  Part 1: Producing Urban Geographies of Crisis  1. Revisiting Territories of Relegation: Class, Ethnicity and State in the Making of Advanced Marginality  2. State-Making as Space-Making: The Three Modes of the Production of Space in Istanbul  3. The City as a Business  Part 2: Governing Cities in Neo-Liberalism  4. Restructuring Melbourne: Uneven Geographies of Success  5. Governing Through Participation: Activation of Civil Commitment in Berlin’s Neighbourhoods  Part 3: Everyday Experience of Urban Neo-Liberalisation  6. Permanent Liminality? Housing Insecurity and Home  7. Athens in Times of Crisis: Experiences in the Maelstrom of EU Restructuring  8. The Right to the City after Grenfell

Introduction: Logics of Urban Marginalisation and Resistance  Part 1: Restructuring and Reordering Urban Citizenship  1. Violence and the Latin American City: Security and Open Citizenship in an Age of Disorder  2. National Policymaking, Contested Citizenship, and the City  3. Criminalising Activist Spaces: Privatisation, Public Order and Moral Order  4. Exclusionary Tales of (Non)Belonging: The Crisis of Urban and National Citizenship in the Netherlands  Part 2: Urban Agency and Resistance  5. Strengthening Urban Citizenship in Berlin. Three Modes of Claiming and Expanding Rights, Resources and Recognition at the Local Level  6. Urban Changes and (Sub-)Citizenship in China: Emergence of the Subaltern-Diaosi Subjects  7. Resistance to Urban Restructuring in Turkey  8. The Promise and Practice of Urban Alliances

Gregor Fitzi is co-director of the Centre for Citizenship, Social Pluralism and Religious Diversity at University of Potsdam, Germany. After his PhD in Sociology at the University of Bielefeld, he was assistant professor at the Institute of Sociology, University of Heidelberg, Germany. Among his recent publications are The Challenge of Modernity. Simmel’s Sociological Theory (2019) and Populism and the Crisis of Democracy, 3 vols. edited with Gregor Fitzi and Bryan S. Turner (2019).

is Professor of Sociology and Director of the Institute for Religion Politics and Society at the Australian Catholic University, Honorary Professor and Director of the Centre for Citizenship, Social Pluralism and Religious Diversity at Potsdam University, Germany, and Emeritus Professor at the Graduate Center at the City University of New York City. He is the founding editor of the Journal of Classical Sociology. He edited the Blackwell Wiley Encyclopedia for Social Theory (2018). He was awarded a Doctor of Letters by Cambridge University in 2009 and received the Max Planck Award in social science in 2015.

is a researcher and lecturer completing her PhD at the University of Potsdam, coordinator of the Centre for Citizenship, Social Pluralism and Religious Diversity and associate member at the collaborative research centre Re-Figuration of Spaces (TU Berlin). Her academic background includes theatre and media studies, anthropology, philosophy and sociology. Her research interests lie in the political and moral economies of housing and home, citizenship, urban sociology and the sociology of everyday life.

is Professor of Sociology and a co-director of the Centre for Citizenship, Social Pluralism and Religious Pluralism at the University of Potsdam, Germany. His research interests lie in the sociology of citizenship, political economy, closure theory, (neo-)liberalism, settler colonialism, and de-democratization. His recent publication is Populism and the Crisis of Democracy, 3 vols., edited with Gregor Fitzi and Bryan S. Turner (2019).

Urban Change and Citizenship in Times of Crisis: 3 Volume Set