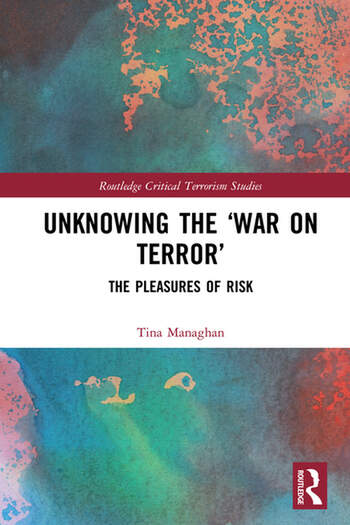 Unknowing the ‘War on Terror’: The Pleasures of Risk

This book offers new insights into the excesses and uncanniness of the ‘War on Terror’ via an engagement with the pleasures of risk.

Engaging with the unconscious, the excess, the uncanny and the spectacular dimensions of the ‘War on Terror’ – as made evident, for example, in the 2012 London Olympic Games and the 2013 manhunt for the Boston Marathon bombers – leads this book to probe the so-called order of things that has made this war intelligible in both mainstream and critical approaches to Security Studies and International Relations. Specifically, this book brings to light and theorizes the obscene pleasures of the ‘War on Terror’ and its supplementary precautionary risk logic. Coming to grips with this (i.e., the pleasures of risk), ultimately via an engagement with critical psychoanalytic theory, leads this book to argue that we may be other than we think we are within critical International Relations (IR) traditions. Furthermore, albeit without discounting the madness, if not desolation, of the present (extending from the ‘War on Terror’ to the politics of Brexit and Donald Trump), it suggests there may be some relief in that yet.

This book will be of much interest to students of critical terrorism studies, critical security studies, political theory and International Relations broadly.

1. The ‘War on Terror’ is Weird: An Introduction

2. We All Dreamed It: Troubling Precautionary Risk Logics

4. The Thrill of the Hunt: Closing in on the Boston Marathon Bombers

5. Traversing the Fantasy(ies): By Way of Conclusion

is Senior Lecturer in the Politics and International Relations Programme at Oxford Brookes University, U.K.

Unknowing the ‘War on Terror’: The Pleasures of Risk