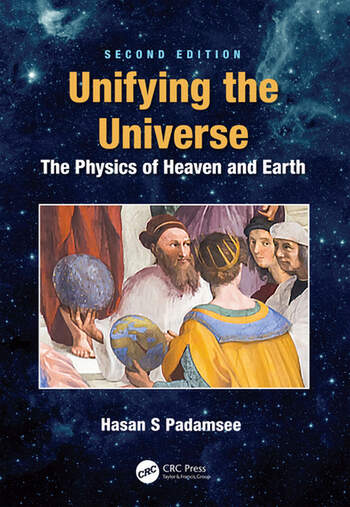 Unifying the Universe: The Physics of Heaven and Earth

Praise for the first edition:
"Unifying the Universe is a masterful synthesis of humanity's long search to understand the deep workings of the universe. Richly illustrated and expertly told, you want to read this book slowly to savour our species' bold and creative attempts to understand our place in the cosmos."
—Professor Brian Greene, Columbia University, author of "The Elegant Universe", "Fabric of the Cosmos", and “The Hidden Reality”

“… a beautiful discussion of the progression of our understanding of the physical world and universe. The book is ideally suited to provide a scientific background for university students not majoring in science."
—Professor David Lee (Nobel Laureate in Physics), Cornell University

Unifying the Universe: The Physics of Heaven and Earth presents a non-technical approach to physics for the lay-science enthusiast. This popular textbook, which evolved from a conceptual course at Cornell University, is intended for non-science undergraduate students taking their first physics module.
This second edition maintains its unique approach in  crossing boundaries between physics and humanities, with connections to art, poetry, history, and philosophy. It explores how the process of scientific thought is inextricably linked with cultural, creative, and aesthetic aspects of human endeavor, opening the readers up to new ways of looking at the world.
The text has been fully updated throughout to address current and exciting new topics in the field, such as exo-planets, the accelerating Universe, dark matter, dark energy, gravitational waves, super-symmetry, string theory, big bang cosmology, and the Higgs boson. There is also an entirely new chapter on the Quantum World, which connects the fascinating topics of quantum entanglement and quantum computing.

Professor Hasan Padamsee has taught the ‘Physics of Heaven and Earth’ at Cornell University to non-science students for the last 20 years. He served as head of the Technical Division at Fermilab. In 2015 he received one of the highest awards in the physics of particle accelerators, the American Physical Society Robert R. Wilson Prize.

Chapter 1. The Shapes of Nature: Beginnings of Scientific Thought

Chapter 2. Matter in Motion - An Elementary Quest: Beyond Reason and Observation

Chapter 5. Celestial Motion: A Heavenly Romance with the Solar System

Chapter 8. Laws of Motion in the Heavens: Opening New Doors through Precision

Chapter 10. Rise of the Mechanical Universe: Unifying Space and Time

is a Professor at Cornell University. He received his BS in Physics from Brandeis University in 1967, and his PhD in Physics from Northeastern University, Boston Mass, in 1973. He later worked at Cornell University in Superconducting Radio Frequency (SRF) science and technology, creating applications for particle accelerators. In 1990, he launched the TeV Energy Superconducting Linear Accelerator (TESLA) which morphed into the TESLA collaboration headed by DESY, and subsequently into the International Linear Collider (ILC). Prof Padamsee received the IEEE Particle Accelerator and Science Technology (PAST) in 2012 and the APS Robert R. Wilson Prize for Achievement in the Physics of Particle Accelerators in 2015. In 2014, Fermilab appointed Prof. Padamsee as the Head of the Technical Division to oversee the development of SRF for the Linac Coherent Light Source –II at SLAC, as well as for Proton Improvement Program (PIP-II) at Fermilab.

Unifying the Universe: The Physics of Heaven and Earth