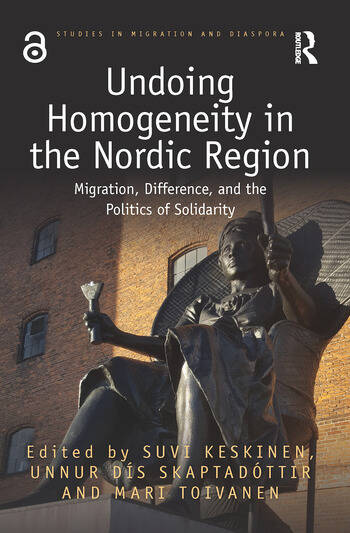 Undoing Homogeneity in the Nordic Region: Migration, Difference and the Politics of Solidarity

Chapter 1 of this book is freely available as a downloadable Open Access PDF under a Creative Commons Attribution-Non Commercial-No Derivatives 4.0 license.

This book critically engages with dominant ideas of cultural homogeneity in the Nordic countries and contests the notion of homogeneity as a crucial determinant of social cohesion and societal security. Showing how national identities in the Nordic region have developed historically around notions of cultural and racial homogeneity, it exposes the varied histories of migration and the longstanding presence of ethnic minorities and indigenous people in the region that are ignored in dominant narratives. With attention to the implications of notions of homogeneity for the everyday lives of migrants and racialised minorities in the region, as well as the increasing securitisation of those perceived not to be part of the homogenous nation, this volume provides detailed analyses of how welfare state policies, media, and authorities seek to manage and govern cultural, religious, and racial differences. With studies of national minorities, indigenous people and migrants in the analysis of homogeneity and difference, it sheds light on the agency of minorities and the intertwining of securitisation policies with notions of culture, race, and religion in the government of difference. As such it will appeal to scholars and students in social sciences and humanities with interests in race and ethnicity, migration, postcolonialism, Nordic studies, multiculturalism, citizenship, and belonging.

1. Narrations of Homogeneity, Waning Welfare States, and the Politics of Solidarity

Part 1: Histories of Homogeneity and Difference

5. Knowledge about Roma and Travellers in Nordic Schools: Paradoxes, Constraints, and Possibilities

6. Problematising the Urban Periphery: Discourses on Social Exclusion and Suburban Youth in Sweden

7. Welfare Chauvinism at the Margins of Whiteness: Young Unemployed Russian-Speakers’ Negotiations of Worker-Citizenship in Finland

8. Starry Starry Night: Fantasies of Homogeneity in Documentary Films about Kvens and Norwegian-Pakistanis

9. From Welfare to Warfare: Exploring the Militarisation of the Swedish Suburb

11. A ‘Muslim’ Response to the Narrative of the Enemy Within

12. Being Unknown: The Securitisation of Asylum Seekers in Iceland

Suvi Keskinen is Professor and an Academy Research Fellow in the Centre for Research on Ethnic Relations and Nationalism (CEREN) at the University of Helsinki, Finland. She is the co-editor of Complying with Colonialism. Gender, Race and Ethnicity in the Nordic Region.

Unnur Dís Skaptadóttir is Professor of Anthropology at the University of Iceland, Iceland. She is the co-editor of Mobility to the Edges of Europe; The Case of Iceland and Poland.

Mari Toivanen is an Academy of Finland Post-Doctoral Researcher at the Swedish School of Social Science, University of Helsinki, Finland. She is the co-editor of Methodological Approaches in Kurdish Studies. Theoretical and Practical Insights from the Field.

"Developing the idea famously set out by W. E. B Du Bois, Stuart Hall suggested that living with difference would be the problem of the twenty-first century. Instances all across the world provide evidence of this and this insightful book, centred on the Nordic countries adds powerfully to a body of critical scholarship on race and ethnicity that shows how entangled they are within repressed histories of internal and external colonisation and imagined nationhood. By considering the treatment of indigenous minorities alongside migrant communities the editors and contributors impressively advance understandings of the ways in which difference is imagined and represented. Moreover the essays in this book skilfully analyse the peculiarity of claimed ethnic homogeneity. By linking the role of this myth to the influential model of the social democratic welfare state they show that Hall’s ‘fateful triangle’ of ethnicity-race-nation requires a fourth pillar, namely the state. Here is a book that may seem to be mainly of relevance to Nordic scholars but will I hope be read well beyond there and by all those interested in ethnicity, migration and the state, for its critical, engaged and engaging, unmasking of assumed homogeneity as well as its search for the possibilities of solidarity across difference." - Karim Murji, Co-editor of Current Sociology, University of West London, UK

"This collection is a welcome addition to the ongoing discussion on politics of difference in Europe. Offering a Nordic perspective, it combines a historical deconstruction of national myths of homogeneity (questioning notions of exceptionality, denials of colonialism/racism and claims of innocence) with policy level analysis (securitization), individual narratives and group negotiation strategies. Particularly insightful is its inclusion of diverse exclusionary discourses in one volume. This strategy highlights the similarities between discourses concerning different disadvantaged groups that are often presented and discussed separately (Samis and Romas but also migrants and asylum seekers). Discussing the interconnected nature of these exclusionary structures through a historical perspective provides a strong foundation for joint struggles from below and for co-creating new politics of solidarity."

"This wide-ranging and engaging collection underlines the historical and political labour involved in producing homogeneity as a state of innocence under perpetual threat. With its emphasis on histories and practices of nation-building, bordering and race-making, the chapters not only contest the political and affective investments in Nordic homogeneity that are so pronounced in the region, and transnationally, they also foreground the reality and potential of forms of solidarity forged against and beyond homogeneity’s coercive fictions."

Undoing Homogeneity in the Nordic Region: Migration, Difference and the Politics of Solidarity