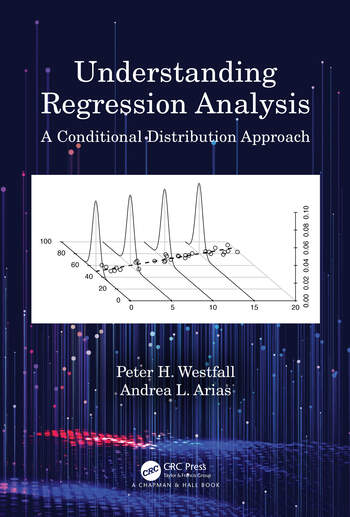 This book unifies diverse regression applications including the classical model, ANOVA models, generalized models including Poisson, Negative binomial, logistic, and survival, neural networks and decision trees under a common umbrella; namely, the conditional distribution model. It explains why the conditional distribution model is the correct model, and it also explains (proves) why the assumptions of the classical regression model are wrong. Unlike other regression books, this one takes a realistic approach from the outset that all models are just approximations. Hence, the emphasis is to model Nature’s processes realistically, rather than to assume (incorrectly) that Nature works in particular, constrained ways.

Key features of the book include:

This book has a strong orientation towards science in general, as well as end-of chapter and self-study questions, so it can be used as a textbook for research-oriented students in the social, biological and medical, and physical and engineering sciences. As well, its mathematical emphasis makes it ideal for a text in mathematics and statistics courses. With its numerous worked examples, it is also ideally suited to be a reference book for all scientists.

Peter H. Westfall has a Ph.D. in Statistics from the University of California at Davis, as well as many years of teaching, research, and consulting experience, in a variety of statistics-related disciplines. He has published over 100 papers on statistical theory, methods, and applications; and he has written several books, spanning academic, practitioner, and textbook genres. He is former editor of The American Statistician, and a Fellow of the American Statistical Association.

is a Senior Operations Research Specialist at BNSF Railway. She has a Ph.D. in Industrial Engineering with a minor in Business Statistics from Texas Tech University, and a Doctoral Degree in Industrial Engineering from Pontificia Universidad Católica de Valparaiso, Chile. Her main areas of expertise include Mathematical Programming, Network Optimization, Statistics and Simulation. She is an active member of the Institute for Operations Research and the Management Sciences (INFORMS.)