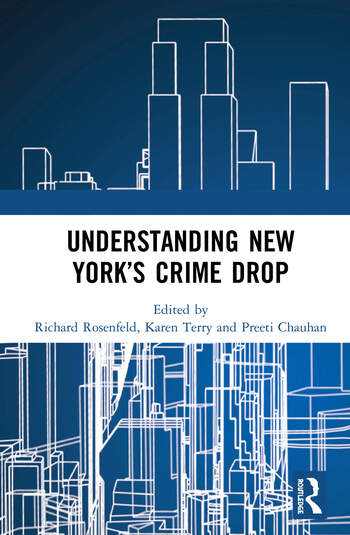 This book explores New York City’s historic crime drop over the past quarter of a century. New York City’s dramatic crime decline is a real brainteaser. No one predicted it and, as of yet, no one has explained it, at least to the satisfaction of most social scientists who study crime trends.

Three strategic lessons emerge from the contributions to this volume on New York’s crime drop. It is suggested that future research should:

The contributors to Understanding New York’s Crime Drop aim to provoke expanded and sustained attention to crime trends in New York and elsewhere.

This book was originally published as a special issue of the journal, Justice Quarterly.

Chapter 2: Placing the Crime Decline in Context: A Comment on Baumer and Wolff, Lauren J. Krivo

Chapter 7: Could Innovations in Policing have Contributed to the New York City Crime Drop even in a Period of Declining Police Strength?: The Case of Stop, Question and Frisk as a Hot Spots Policing Strategy, David Weisburd, Cody W. Telep & Brian A. Lawton

Richard Rosenfeld is the Curators’ Distinguished Professor Emeritus of Criminology and Criminal Justice at the University of Missouri - St . Louis, USA. He has written extensively on crime trends, policing, and criminal justice policy. Dr. Rosenfeld is a Fellow and former President of the American Society of Criminology.

is an Associate Professor in the Psychology Department and the Director of the Data Collaborative for Justice at John Jay College of Criminal Justice, USA. Her work has focused on policing, incarceration, and lower-level enforcement.