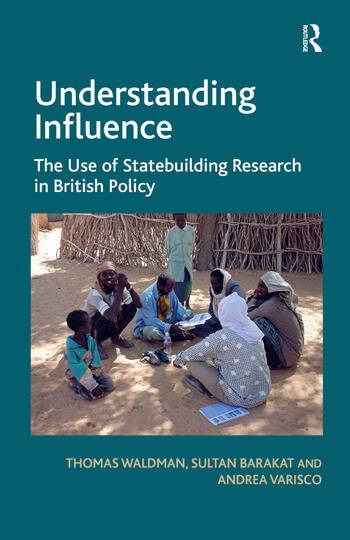 Understanding Influence: The Use of Statebuilding Research in British Policy

The overarching objective of this book is to analyse the manner in which statebuilding-oriented research has and can influence policies in fragile, post-conflict environments. Large-scale, externally-assisted statebuilding is a relatively new and distinct foreign policy domain having risen to the forefront of the international agenda as the negative consequences of state weakness have been repeatedly revealed in the form of entrenched poverty, regional instability and serious threats to international security. Despite the increasing volume of research on statebuilding, the use and uptake of findings by those involved in policymaking remains largely under-examined. As such, the main themes running through the book relate to issues of research influence, use and uptake into policy. It grapples with problems associated with decision-making dynamics, knowledge management and the policy process and draws on concepts and analytical models developed within the public policy and research utilisation literature. This book will be of great interest to researchers, knowledge managers and policymakers working in the fields of post-war reconstruction, statebuilding, fragile states, stabilisation, conflict and development.

’The mixed record of statebuilding over the past decade has generated a clamour for evidence on what works best. Ironically, there has been very little evidence on whether evidence is actually used in policymaking - until now. Rigorously researched, well-written and thoughtfully put together, this impressive book offers insight and analysis on the genesis of policymaking. It will become a must-read for practitioners and researchers alike.’ Iain King, Head of Conflict Research, Department for International Development (DFID), UK ’This is a very important book because it demonstrates why evidence is not a sufficient criterion for winning the war of ideas in statebuilding. By implication it seeks to reconcile the world of theory and the world of practice to focus more directly on problem-solving rather than problem-making. As such it makes a path-breaking contribution to statebuilding research.’ Mark Evans, Institute for Governance and Policy Analysis, Australia

Understanding Influence: The Use of Statebuilding Research in British Policy