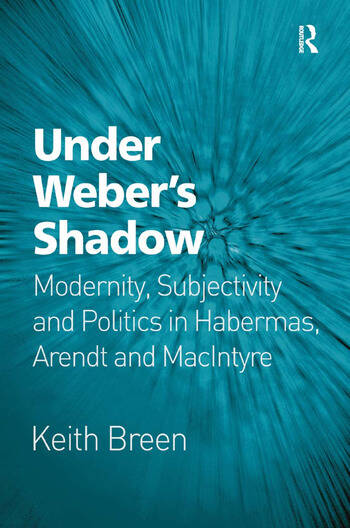 Under Weber’s Shadow: Modernity, Subjectivity and Politics in Habermas, Arendt and MacIntyre

Under Weber's Shadow presents an extended critical evaluation of the social and political thought of JÃ¼rgen Habermas, Hannah Arendt and Alasdair MacIntyre. Although hailing from very different philosophical traditions, these theorists all take as their starting-point Max Weber's seminal diagnosis of late modernity, the view that the world-historic processes of rationalization and disenchantment are paradoxical in promising freedom yet threatening servitude under the 'iron cage' of instrumental reason. However, each rejects his pessimistic understanding of the grounds and possibilities of political life, accusing him of complicity in the very realities he sought to resist. Seeking to move beyond Weber's monological view of the self, his subjectivism and his identification of the political with domination, they offer alternative, intersubjective conceptions of the subject, ethics and politics that allow for positive future possibilities. But this incontrovertible gain, it is argued, comes at the cost of depoliticizing key arenas of human endeavour and of neglecting the reality of struggle and contestation. Engaging with important current debates and literature, Keith Breen provides a rigorous analysis of the work of Habermas, Arendt, MacIntyre and Weber and a highly accessible and original intervention within contemporary social and political thought. Under Weber's Shadow will therefore be of interest to students and researchers alike within the areas of social and political theory, as well as those within the disciplines of ethics, sociology and philosophy.

Keith Breen is a Lecturer in political Theory at the School of Politics, International Studies and Philosophy, Queen's University Belfast, Northern Ireland

'Through a rich and imaginative engagement with the writings of Habermas, Arendt and MacIntyre, Keith Breen conducts a profound and challenging investigation into the legacy of a broadly Weberian understanding of the political condition of modernity, and the place of individual subjectivity within it. Under Weber's Shadow is a work that should be of exceptional interest to all those concerned with the way we live now.' John Horton, Keele University, UK 'Under Weber's Shadow offers a powerful demonstration of just how central - and how intellectually productive - Weber's analysis of modernity was for twentieth-century political theory. Breen's insightful examinations of Habermas, Arendt, and MacIntyre, reveal surprising continuities across their work, while mounting a compelling argument against their "intersubjectivist" responses to Weber's political realism.' Jason Frank, Cornell University, USA 'Based on a breathtaking reconstruction of the limits of Weber's vision of modernity and modern political life and of Habermas's, Arendt's and MacIntyre's various attempts to overcome these limits, Breen offers a creative and vigorous vindication of the strategic moment of politics, albeit one directed towards human flourishing and kept in check by moderation and care.' Alessandro Ferrara, University of Rome 'Tor Vergata', Italy '... each of these assessments is highly insightful and detailed, the authors presented fairly, sympathetically, and in their own voice, the subsequent critique is all the more penetrating and persuasive. There are flashes of brilliance here... of special interest to scholars of Arendt, Habermas and MacIntyre...' LSE Review of Books blog '[Breen’s] for the most part well-argued and often illuminating reading of Habermas, Arendt, and MacIntyre helps broaden our understanding of these three distinct thinkers’ varying critiques of and responses to Weber and the challenge of political modernity - as well as their possible limitations. In so do

Under Weber’s Shadow: Modernity, Subjectivity and Politics in Habermas, Arendt and MacIntyre