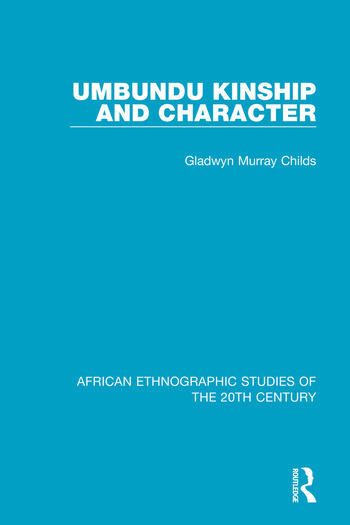 Originally published in 1949, this book discusses Umbundu social structure and education, with particular reference to how both of these adapted as Angola's contact with Western influences increased in the first half of the twentieth century. Using materials gathered in the field, this volume charts the rapid pace of change which caused social disintegration among the Ovimumbundu, a significant Bantu-speaking group in the Benguela Highland of Angola. Differing approaches to education including assimiliation and adaptation are examined and their merits discussed.

4. Significance of the Social Structure

Gladwyn Murray Childs was an American minister, missionary and anthropologist. After retirement, he worked for the World Council of Churches in Lisbon, but sought to return to Angola to work on a prehistoric project. Childs also worked with his uncle, Merlin Ennis, a researcher of folk tales, on Umbundu folktales.