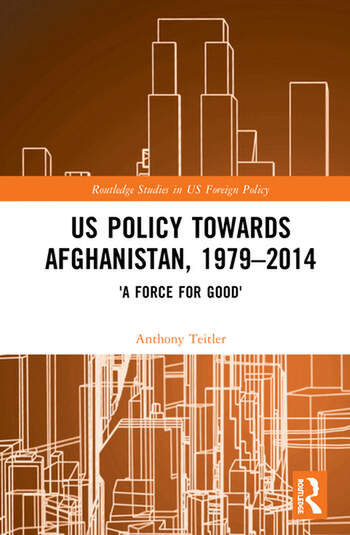 Providing a study of US policy towards Afghanistan from the Soviet intervention of 1979 to the exit of US/International Security Assistance Forces (ISAF) combat troops at the end of 2014, this book examines how the United States’ construction of its interests has shaped its long-term involvement with that country.

Recognising that there is a particular focus on the United States’ representation and justification of its Afghan policy, this work demonstrates how the intertwining of language and social practices provided policymakers’ with a shared meaning on selling policy. In this way, Washington justified its practices – including covert operations, diplomacy, counterterrorism and war – as essential in ensuring that ‘good’ prevailed over ‘evil’. Teitler’s argument contrasts with the existing literature, which predominantly argues the US has been motivated by self-interest in its dealings with Afghanistan. Teitler deploys a constructivist approach to elucidate upon US-Afghan relations in this critical historical juncture.

Through its particular use of constructivism, the work aims to contribute more broadly to international relations and US foreign policy scholarship. This book will be of interest to academics and students in various fields, including US foreign and security policy, IR theory, the Greater Middle East, Afghanistan, American exceptionalism, constructivism and discourse analysis.

Chapter 1 – The intersection of constructivism and American exceptionalism

Chapter 2 – Supporting the Afghan ‘freedom fighters’ against the ‘perils’ of communism, 1979-1989

Chapter 4 – The Obama administration and the renewed significance of Afghanistan

Chapter 5 – Obama and Afghanistan: the continuing danger of a ‘safe haven’?

Anthony Teitler is head of the International Relations and PPE undergraduate programs at the Karlshochschule International University, Germany, and a visiting lecturer at the University of Buckingham.