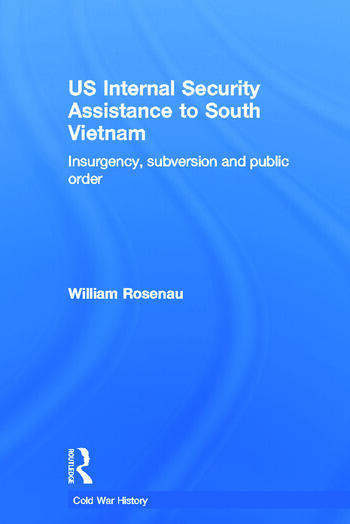 This new study of American support to the regime of Ngo Dinh Diem in South Vietnam illuminates many contemporary events and foreign policies.

During the Eisenhower and Kennedy administrations, the United States used foreign police and paramilitary assistance to combat the spread of communist revolution in the developing world. This became the single largest internal security programme during the neglected 1955-1963 period. Yet despite presidential attention and a sustained campaign to transform Diem’s police and paramilitary forces into modern, professional services, the United States failed to achieve its objectives.

Given the scale of its efforts, and the Diem regime’s importance to the US leadership, this text identifies the three key factors that contributed to the failure of American policy. First, the competing conceptions of Diem’s civilian and military advisers. Second, the reforms advanced by US police training personnel were also at odds with the political agenda of the South Vietnamese leader. Finally, the flawed beliefs among US police advisers based on the universality of American democracy.

This study also shows how notions borrowed from academic social science of the time became the basis for building Diem’s internal security forces.

This book will be of great interest to all students and scholars of intelligence studies, Cold War studies, security studies, US foreign policy and the Vietnam War in general.

Preface and Acknowledgements Abbreviations Introduction  1. Einsehower, US Foreign Internal Security Assistance, and the Struggle for the Developing World  2. Shoring up America’s Man: The Origins of Police and Paramilitary Assistance to South Vietnam, 1954-56  3. The Struggle for Reform: The United States and Diem’s Internal Security Forces, 1956-58  4. Competing Conceptions: The United States, Diem, and the Civil Guard, 1955-1961  5. John F. Kennedy, Foreign Internal Security Assistance, and the Challenge of ‘Subterranean War’  6. ‘Ridiculous Representatives of Mr. Diem’: Paramilitary Forces and the Strategic Hamlet Programme, 1961-1963  7. American Universalism and the ‘Triumph of Technique’: The Kennedy Administration and Civilian Police Reform in South Vietnam Conclusion Appendix: Intelligence Documents Denied under the Freedom of Information Act Notes Bibliography