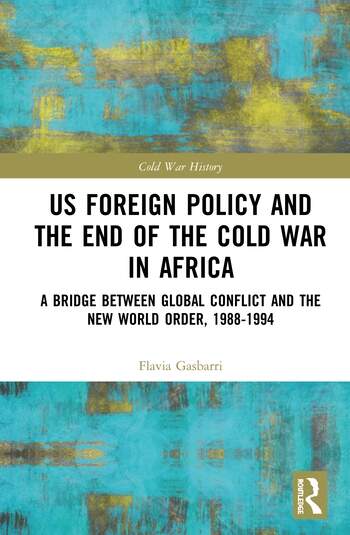 US Foreign Policy and the End of the Cold War in Africa: A Bridge between Global Conflict and the New World Order, 1988-1994

This book investigates the end of the Cold War in Africa and its impact on post-Cold War US foreign policy in the continent.

The fall of the Berlin Wall is widely considered the end of the Cold War; however, it documents just one of the many ‘ends’, since the Cold War was a global conflict. This book looks at one of the most neglected extra-European battlegrounds, the African continent, and explores how American foreign policy developed in this region between the late 1980s and the early 1990s. Drawing on a wide range of recently disclosed documents, the book shows that the Cold War in Africa ended in 1988, preceding the fall of the Berlin Wall. It also reveals how, since then, some of the most controversial and inconsistent episodes of post-Cold War US foreign policy in Africa have been deeply rooted in the unique process whereby American rivalry with the USSR found its end in the continent. The book challenges the traditional narrative by presenting an original perspective on the study of the end of the Cold War and provides new insights into the shaping of the US foreign policy during the so-called ‘unipolar moment’.

This book will be of much interest to students of Cold War History, US foreign policy, African politics and International Relations.

1. The United States and the Cold War in Africa

Flavia Gasbarri is Lecturer in War Studies, co-chair of the Africa Research Group, and a member of the Centre for Grand Strategy at the War Studies Department, King’s College London, UK.

US Foreign Policy and the End of the Cold War in Africa: A Bridge between Global Conflict and the New World Order, 1988-1994