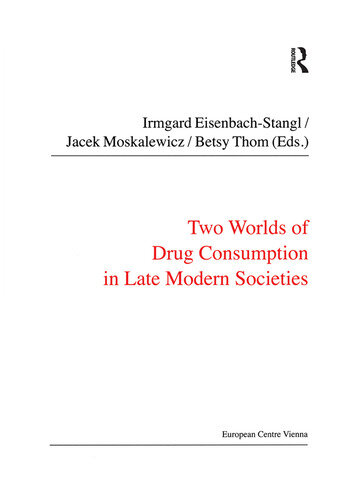 Two Worlds of Drug Consumption in Late Modern Societies reports the findings of an empirical study of drug users in London, Amsterdam, Turin, Prague, Vienna and Warsaw, European cities representative of a wide range of drug problems and public policies. The innovative study reconceives the standard distinctions between 'hard-core' and 'recreational' drug users in terms of their social position. The authors argue that this is closely related to consumption patterns rather than drug choice, and reveals that 2 relatively homogenous drug worlds exist within each of the study sites. This leads to the development of diverging drug markets; a friendly market for the integrated consumer, and a highly commercialized one for the marginalized customer, where low quality goods are sold at a higher price. These findings have significant implications for academics and professionals working in health, psychology and urban studies.

Professor Irmgard Eisenbach-Stangl is Senior Social Scientist and Lead Researcher in the research area Alcohol, Drugs and Addiction at the European Centre for Social Welfare Policy and Research, Vienna, Austria. She is also University Professor at the Institute for Sociology, University of Vienna and a practising psychotherapist. Dr Jacek Moskalewicz is Head of the Alcohol and Drug Research Group, Institute for Psychiatry and Neurology, Warsaw, Poland. Professor Betsey Thom is Professor at the Institute of Social and health Research, School of Health and Social Sciences, Middlesex University, UK.