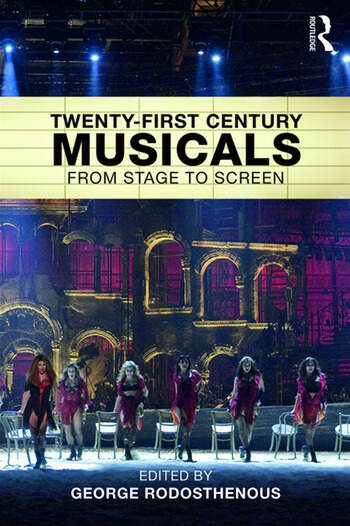 Twenty-First Century Musicals stakes a place for the musical in today’s cinematic landscape, taking a look at leading contemporary shows from their stage origins to their big-screen adaptations. Each chapter offers a new perspective on a single musical, challenging populist narratives and exploring underlying narratives and sub-texts in depth. Themes of national identity; race, class and gender; the ‘voice’ and ‘singing live’ on film; authenticity; camp sensibilities; and the celebration of failure are addressed in a series of questions including:

Re-interpreting the contemporary film musical as a compelling art form, Twenty-First Century Musicals is a must-read for any student or scholar keen to broaden their understanding of musical performance.

2.  All That Jazz: the difficult journey of Chicago (2002) from stage to screen ROBERT GORDON (Goldsmiths)

3. Ready for His Close-Up:  From Horror to Romance in The Phantom of the Opera (2004) JESSICA STERNFELD (Chapman)

5. Where did we go right (and wrong)? Success and failure in adaptations of The Producers (2005) from and to the screen JULIAN WOOLFORD (GSA)

6. "Big, as in Large, as in Huge": Dreamgirls and Difference in the Performance of Gender, Blackness, and Popular Music History TODD DECKER (Washington in St Louis)

7. At the Intersection of Music, Sexuality and Race: Hairspray's Generic and Aesthetic Variances LINDA MOKDAD (University of Michigan)

8. "With a Bit of Rock Music, Everything is Fine": MAMMA MIA! (2008) and the Camp Sensibility on screen HELEN LEWIS (Boston Conservatory)

to Nine to Nine: Evolutions of a Cinema Classic ARTHUR PRITCHARD (University of Leeds)

11. The Ethical Exculpation of Moral Turpitude: Representations of Violence and Death in Sweeney Todd and Into The Woods TIM STEPHENSON (University of Leeds)

12. The Last Five Years (2014): Medium, Mode and the Making of Cathy. SARAH BROWNE (University of Wolverhampton)

13. The Trouble with "Little Girls": Annie on the big (and small) screen OLAF JUBIN (Regent’s)

14.  London Road: the ‘irruption of the real’ and haunting utopias in the verbatim musical. DEMETRIS ZAVROS (University of Wolverhampton)

George Rodosthenous is Associate Professor in Theatre Directing at the School of Performance and Cultural Industries, University of Leeds.