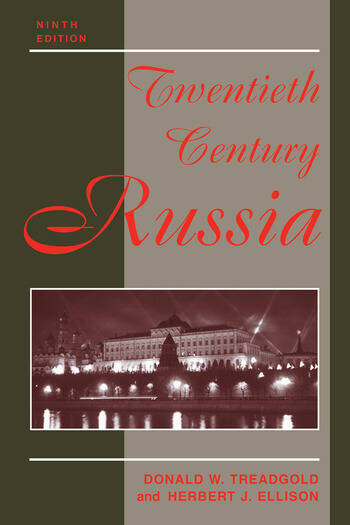 Donald Treadgoldwas one of the most distinguished Russian historians of his generation. His Twentieth Century Russia, a standard text in colleges and universities for several decades,has been regularly revised and expanded to reflect new events and scholarship. The present revision, by Professor Herbert Ellison, contains a major chapter on the Yeltsin era, and brings the Russian story to the final year of the century.Twice in the twentieth century the collapse of the Russian state and empire has been followed by an effort to build a democracy on the Western model. The first effort succumbed within a few months to Lenin's communist revolution, whose ideas and institutions dominated the history of Russia, and eventually much of the world, during the succeeding seventy-four years. In August 1991, an attempt by Soviet leaders to suppress democratic and nationalist movements unleashed by the Gorbachev reforms, and already victorious in Eastern Europe, precipitated instead an anti-communist revolution under the leadership of Boris Yeltsin.The revolution, and the sweeping transformation that followed, are treated in the new edition, which assesses the aims and scope of the first decade of Russia's second revolution. The transformation included a new constitutional structure, two fully democratic parliamentary elections and a presidential election (with another of each soon to come), a vigorous revival of political parties and political debate, and major questions about Russia's political future. Against the broad background of the Russian experience over a turbulent century, it raises the major questions: What are the prospects for Russian democracy? Why are the communists, following an anti-communist revolution, the most powerful parliamentary party in Russia's new parliament, and what is their impact? Why has the conversion to a market economy proved so difficult and painful, and what are its prospects? How has Russia related to the new states that were once fellow republics of the USSR? Why has the foreign policy of the new Russian democracy moved from a vision of partnership with the US to a reality of conflict and confrontation?Twentieth Century Russia poses these questions, and many more, for the student and the general reader alike, against the fascinating background of Russia's experience before, during and since the era of communist rule, exploring the roots of current developments in the communist and pre-communist past.