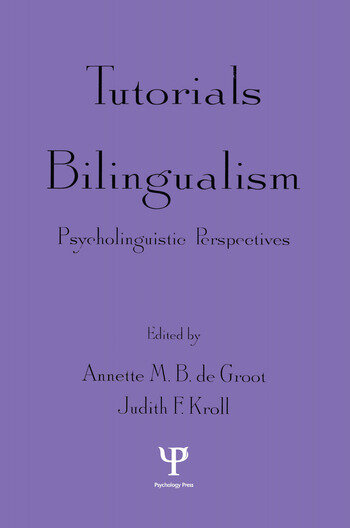 The past fifteen years have witnessed an increasing interest in the cognitive study of the bilingual. A major reason why psychologists, psycholinguists, applied linguists, neuropsychologists, and educators have pursued this topic at an accelerating pace presumably is the acknowledgment by increasingly large numbers of language researchers that the incidence of monolingualism in individual language users may be lower than that of bilingualism. This alleged numerical imbalance between monolinguals and bilinguals may be expected to become larger due to increasing international travel through, for instance, tourism and trade, to the growing use of international communication networks, and to the fact that in some parts of the world (i.e., Europe), the borders between countries are effectively disappearing.

In addition to the growing awareness that bilinguals are very common and may even outnumber monolinguals, there is the dawning understanding that the bilingual mind is not simply the sum of the cognitive processes associated with each of the two monolingual modes, and that the two languages of bilingual may interact with one another in complicated ways. To gain a genuinely universal account of human cognition will therefore require a detailed understanding of language use by both pure monolinguals as well as bilinguals, unbalanced and balanced, and of the representations and processes involved.

These two insights, that bilingualism is a common human condition and that it may influence cognition, were presumably instrumental in putting bilingualism on the agendas of many researchers of cognition and language in recent years. But other reasons may have played a role too: The study of bilingualism also provides a unique opportunity to study the relation between language and thought. A final reason for the growing interest in this area of research is the awareness that bilingualism may confer the benefit of broadening one's scope beyond the limits of one's own country and culture.

This book serves as an excellent introduction to the important topics in the psycholinguistic study of bilingualism. The chapters represent a comprehensive and interrelated set of topics that form the core of contemporary research on the psycholinguistics of bilingualism. The issues raised within this perspective not only increase our understanding of the nature of language and thought in bilinguals but also of the basic nature of the mental architecture that supports the ability to use more than one language.

"...provides the reader with insights into a rich range of research traditions....covers a broad range of issues not usually brought together. The reader is thus provided with a clear introduction to the complexity and controversy surrounding research in this area."
—TESL-EJ

"...the book raises many important issues. It offers an excellent resource, pulling together literature from a variety of areas in a thoughtful way."
—American Scientist