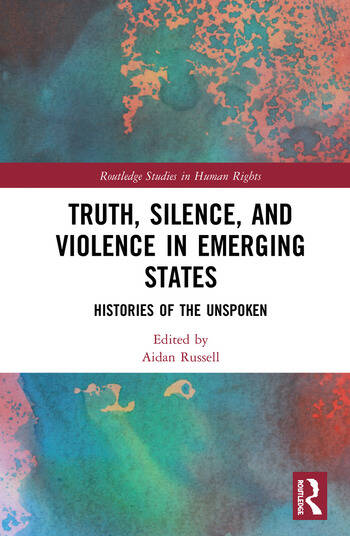 Truth, Silence and Violence in Emerging States: Histories of the Unspoken

Around the world in the twentieth century, political violence in emerging states gave rise to different kinds of silence within their societies. This book explores the histories of these silences, how they were made, maintained, evaded, and transformed.

This book gives a comprehensive view of the ongoing evolutions and multiple faces of silence as a common strand in the struggles of state-building. It begins with chapters that examine the construction of "regimes of silence" as an act of power, and it continues through explorations of the ambiguous limits of speech within communities marked by this violence. It highlights national and transnational attempts to combat state silences, before concluding with a series of considerations of how these regimes of silence continue to be extrapolated in the gaps of records and written history. This volume explores histories of the composed silences of political violence across the emerging states of the late twentieth century, not solely as a present concern of aftermath or retrospection but as a diachronic social and political dimension of violence itself.

This book makes a major original contribution to international history, as well as to the study of political terror, human rights violations, social recovery, and historical memory.

2. Testimony: Silence as the Cornerstone of Impunity in Guatemala [Raúl Molina Mejía]

4. Euphemism, Censorship and the Vocabularies of Silence in Burundi [Aidan Russell]

5. "What Made the Elephant Rise Up from the Shade?": Relationships in Transition and Negotiating Silence in Mozambique [Victor Igreja]

6. "A Deafening Silence" and "A Piece of Speech": Regimes of Silence in an African Counter-Insurgency [Luise White]

8. The World Was Silent? Global Communities of Resistance to the 1965 Repression in the Cold War Era [Katharine McGregor]

10. Censorship, Indifference and Oblivion: The Armenian Genocide and its Denial [Vicken Cheterian]

Aidan Russell is an Assistant Professor of International History at the Graduate Institute for International and Development Studies Geneva, and a former fellow of Trinity College, Cambridge. His forthcoming monograph is entitled Politics and Violence in Burundi: The Language of Truth at the End of Empire.

Truth, Silence and Violence in Emerging States: Histories of the Unspoken