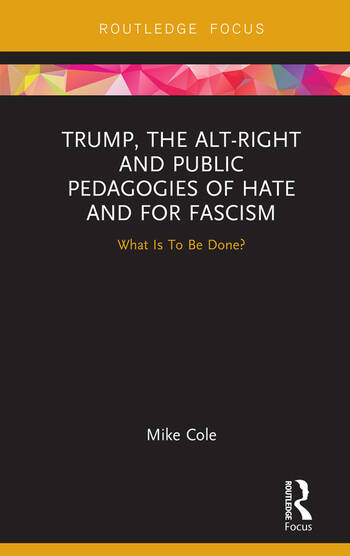 Trump, the Alt-Right and Public Pedagogies of Hate and for Fascism: What is to be Done?

Trump, the Alt-Right and Public Pedagogies of Hate and for Fascism: What Is To Be Done? uses public pedagogy as a theoretical lens through which to view discourses of hate and for fascism in the era of Trump and to promote an anti-fascist and pro-socialist public pedagogy. It makes the case for re-igniting a rhetoric that goes beyond the undermining of neoliberal capitalism and the promotion of social justice, and re-aligns the left against fascism and for a socialism of the twenty-first century.

Beginning with an examination of the history of traditional fascism in the twentieth century, the book looks at the similarities and differences between the Trump regime and traditional Western post-war fascism. Cole goes on to consider the alt-right movement, the reasons for its rise, and the significance of the internet being harnessed as a tool with which to promote a fascistic public pedagogy. Finally, the book examines the resistance against these discourses and addresses the question of: what is to be done?

This topical book will be of great interest to scholars, to postgraduate students and to researchers, as well as to advanced undergraduate students in the fields of education studies, pedagogy, and sociology, as well as readers in general who are are interested in the phenomenon of Trumpism.

Chapter 1 ‘One glorious destiny in one shared home that belongs to us’: the ominous rise of Donald J. Trump

Chapter 2: The wall, the travel ban, ‘Pocahontas’, ‘sons of bitches’ from ‘shithole countries’, and DACA: Trump’s racist/fascistic discourse as a public pedagogy of hate

Chapter 3 ‘Our glorious leader has ascended to God Emperor! Hail Trump! Hail our people! Hail victory!’: the alt-right and public pedagogies of hate and for fascism

Chapter 4 ‘The_Donald’; ‘Trump-like candidates in the future’; and ‘waking up whites from their slumber’ – public pedagogy furthering the fascist agenda

Chapter 5 ‘No Trump! No KKK! No fascist USA!’: reality and resistance

Chapter 6 ‘A broad front against fascism and capitalism’: reform, revolution, and a public pedagogy for socialism

Mike Cole is Professor in Education in the International Centre for Public Pedagogy at the University of East London.

Trump, the Alt-Right and Public Pedagogies of Hate and for Fascism: What is to be Done?