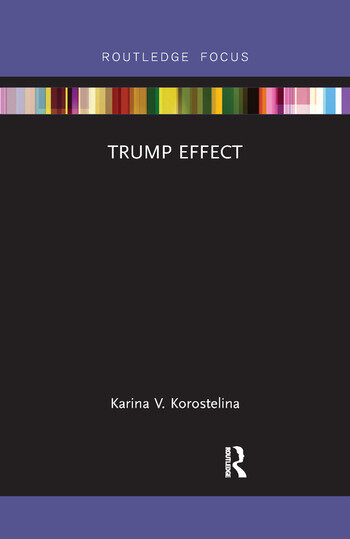 Professor Karina V. Korostelina presents insights into the "Trump effect" and explains how the support for Trump among the American general public is based on three complementary pillars. First, Trump champions a specific conception of American national identity that empowers his supporters. Second, Trump's leadership has, to an extent, been crafted from his ability to recognize where and with whom he can get the most return on his investment (e.g. his political comments) and address the perceived general malaise in the U.S. Trump also mirrors the emotions of a disenfranchised American public, and inspires the use of frustration based anger and insults to achieve desired aims. He addresses the public’s intolerance of uncertainty and ambivalence by providing simpler solutions to complex national problems and by blurring the boundary betweent he leading political parties. Further, Trump employs existing political polarization and has established a new kind of morality. Third, Trump challenges the existing political balance of power within the U.S. and globally.

The overarching goal of this book is to show how the popularity of Trump has revealed substantial problems in the social, political, and economic fabric of American life.

Aimed at the general public and students in the U.S. and internationally, the book goes beyond many explanations of the "Trump Effect". Using a multidisciplinary theoretical lens, it provides a systemic multifaceted analysis based on multiple theories of social identity, emotions, cognitions, morality, and power to explain the broader social phenomena of the rise of individuals in society.

Chapter 2: Win With Me

Chapter 5: The World Is Simple

Chapter 6: The Good, The Bad, and The Ugly

Karina V. Korostelina is a Professor at the School for Conflict Analysis and Resolution, and a Director of the Program on History, Memory and Conflict at George Mason University. Professor Korostelina is a social psychologist whose work focuses on social identity and identity-based conflicts, intergroup insult, the nation building processes, role of history in conflict and post-conflict societies, conflict resolution and peacebuilding. She is a recipient of thirty-nine fellowships and grants. She has edited six books and authored nine books and numerous articles.