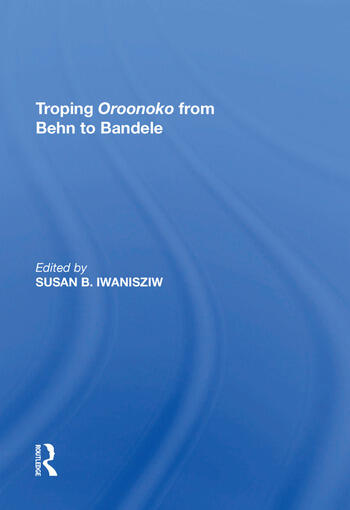 Troping Oroonoko from Behn to Bandele

This volume of essays invites the reader to assess literary texts from within the frame of the texts' cultural history, which includes issues of authorship and literary or stage convention as well as the social and political institutions that shaped and marketed that literature. The collection initiates just such an in-depth and focused analysis of the complex literary and social history of the royal slave Oroonoko. All eight essays address elements in the evolution of Oroonoko, from Behn's 1688 novella to Southerne's 1696 dramatic adaptation, and thence to the adaptations by Hawkesworth (1759), Gentleman (1760), Anonymous (1760), Ferriar (1788), Bellamy (1789) and Bandele (1999), who serially expropriated the play as a platform to debate responsibility in matters of slavery and colonialism. Perhaps unique among literary creations, Oroonoko and his entourage, with their distinctive race, class and gender attributes, came into popular consciousness as tropes gauging important shifts in English values during the course of the transatlantic slave trade. Accordingly, this study aims to provide a specific exemplum of rigorous, focused research on a single, complex and controversial topic but also to complicate some of our received notions about Oroonoko, slavery and abolition with a view to encouraging a more rigorous analysis of the cultural history underpinning literary texts. .

Troping Oroonoko from Behn to Bandele