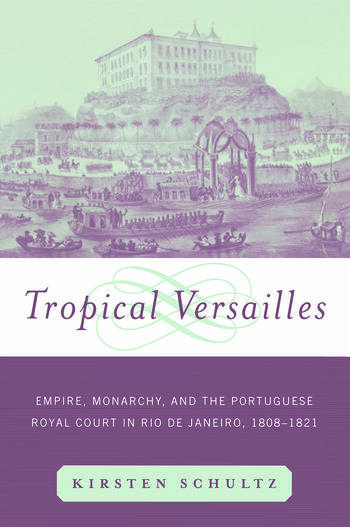 This engaging study tells the fascinating story of the only European empire to relocate its capital to the New World.

Kirsten Schultz is a Fellow in the Faculty of Humanities and Social Sciences at The Cooper Union in New York City.

"This is a beautifully written and brilliantly argued study of one of the most extraordinary moments in the history of the Atlantic world. Schultz deftly traces the many dramatic ramifications of the Portuguese court's geographic and cultural relocation to Brazil. This book should be required reading for anyone working on Brazilian history, the Portuguese empire, Latin American independence or Atlantic history." -- Barbara Weinstein, Professor of History, The University of Maryland-College Park
"The high drama of events which took place during the transfer of the Portuguese court, coupled with a historiography which emphasized an economic explanation for independence rather than seeking out the political circumstances, appears to have stifled critical scholarly attention to the years 1808-1821 in Brazil. No longer. Kirsten Schultz focuses on what the transfer meant to contemporaries, on its aftermath, and on contemporary political culture. A pioneering study!" -- A.J.R. Russell-Wood, Professor of History, The Johns Hopkins University
"A fresh approach to an important episode in the colonial history of the Americas by a competent and innovative scholar." -- Neill Macaulay, Professor Emeritus, The University of Florida
"A remarkably interesting book about a long-neglected episode in South American history." -- Foreign Affairs
"However much this study owes to the last decade or two of fashionable cultural history, it is grounded in a very thorough study of archival sources and published contemporary works...She is also to be commended for the dispassionate quality of her analysis and conclusions...This cultural approach and close ideological reading are an innovative contribution with clear potential for further work by others...It is a welcome book, clearly written, vigorously argued, and potentially seminal. It is sure to endure." -- H-LatAm, Jeffrey D. Needell, Dept. of History, U. of Florida
"She is also to be commended for the dispassionate quality of her analysis and conclusions. However provocative the subjects, she conveys the perspectives of contemporaries with care and comes to her own assessments with judicious detachment. It is a welcome book, clearly written, vigorously argued, and potentially seminal. It is sure to endure." -- H-Net Reviews
"Schultz really shines in her analysis of political rhetoric. In particular, she shows how flexible rhetorical categories allowed disparate factions to agree...Schultz concludes with a very detalied analysis of competing definitions of constitutionalism within Brazil and in Portugal...a fine work that substantively advances our understanding of Brazil's transition from colony to nation." -- Judy Bieber, American Historical Review
"This book will be richly rewarding for those interested in the relationship between ideas and practice and between politics and society, both generally and during the transition from the early modern to the modern age." -- Thomas Holloway, Hispanic American Historical Review