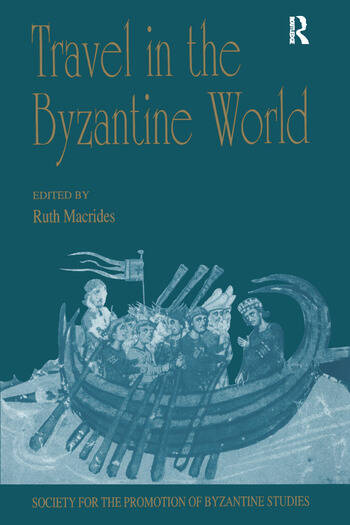 Travel in the Byzantine World: Papers from the Thirty-Fourth Spring Symposium of Byzantine Studies, Birmingham, April 2000

The contributions to this volume have been selected from the papers delivered at the 34th Spring Symposium of Byzantine Studies at Birmingham, in April 2000. Travellers to and in the Byzantine world have long been a subject of interest but travel and communications in the medieval period have more recently attracted scholarly attention. This book is the first to bring together these two lines of enquiry. Four aspects of travel in the Byzantine world, from the sixth to the fifteenth century, are examined here: technicalities of travel on land and sea, purposes of travel, foreign visitors' perceptions of Constantinople, and the representation of the travel experience in images and in written accounts. Sources used to illuminate these four aspects include descriptions of journeys, pilot books, bilingual word lists, shipwrecks, monastic documents, but as the opening paper shows the range of such sources can be far wider than generally supposed. The contributors highlight road and travel conditions for horses and humans, types of ships and speed of sea journeys, the nature of trade in the Mediterranean, the continuity of pilgrimage to the Holy Land, attitudes toward travel. Patterns of communication in the Mediterranean are revealed through distribution of ceramic finds, letter collections, and the spread of the plague. Together, these papers make a notable contribution to our understanding both of the evidence for travel, and of the realities and perceptions of communications in the Byzantine world. Travel in the Byzantine World is volume 10 in the series published by Ashgate/Variorum on behalf of the Society for the Promotion of Byzantine Studies.

Contents: Preface; Introduction: Byzantium on the move: imagining a communications history, M. McCormick; Going There - the Technicalities of Travel: Types of ships and their performance capabilities, J. H. Pryor; Portulans and the Byzantine world, P. Gautier Dalché; Roads and travel in Macedonia and Thrace in the middle and late Byzantine period, K. Belke; Horses and horse-doctors on the road, A. McCabe; Travelling with the plague, D. Ch. Stathakopoulos; Getting Around - the Purposes of Travel: Maritime trade and the food supply for Constantinople in the Middle Ages, J. Koder; Medieval trade in the sea of Marmara: the evidence of shipwrecks, N. GÃ¼nsenin; The Byzantine ship at SerÃ§e Limani: an example of small-scale maritime commerce with Fatimid Syria in the early 11th century, F. van Doorninck, jr.; Byzantine and early post-Byzantine pilgrimage to the Holy Land and to Mount Sinai, A. Kuelzer; Being There: Bilingual word lists and phrase lists: for teaching or for travelling?, K. Ciggaar; Sightseeing in Constantinople: Arab travellers, c. 900-1300, A. Berger; Constantinople: the crusaders’ gaze, R. Macrides; The decline of Byzantium seen through the eyes of western travellers, M. Angold; Going Over It - Representations of Travel and Space: The conquest of space, L. Brubaker; In peril on the sea: travel genres and the unexpected, M. E. Mullett; Index.

Travel in the Byzantine World: Papers from the Thirty-Fourth Spring Symposium of Byzantine Studies, Birmingham, April 2000