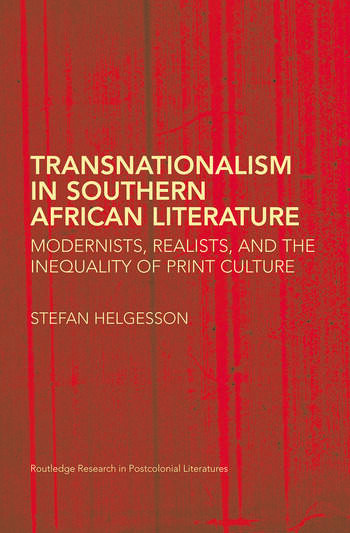 Transnationalism in Southern African Literature: Modernists, Realists, and the Inequality of Print Culture

Stefan Helgesson suggests that the prevalence of ‘colonial’ languages such as English and Portuguese in ‘anticolonial’ or ‘postcolonial’ African Literature is primarily an effect of the print network. Helgesson aims to demystify the authority of English and Portuguese by stressing the materiality of the print medium and emphasising the strong transnational and transcontinental vectors of southern African literature after the Second World War.

This is the first study ever to compare literature and literary criticism in English and Portuguese from the southern African region. It looks at the years 1945-1975 and not only highlights a largely forgotten legacy of modernism, but also reopens the debate on literary realism in southern Africa. The cities of Johannesburg, Maputo (then Lourenço Marques) and Luanda are the key geographical nodes of the book; the important intellectual developments in Maputo and Luanda at this time are little known in the English-speaking world. By looking at literary journals and the genres of poetry, prose narrative and criticism, the book maps the transnational networks which enabled writers and critics such as Lewi Nkosi, Nadine Gordimer, Mário Pinto de Andrade, and Bernardo Honwana to negotiate their marginal position relative to dominant centers of literary authority. The achievements of these writers, the book argues, can only be assessed in relation to this marginalization and the often racialized predicament of the print medium. The languages of English and Portuguese offer different literary possibilities in this context, which is due to their uneven transnational strengths as well as local factors. In brief, this is a media-specific study of the unequal reality of "world literature."

Stefan Helgesson is professor of English at Stockholm University, Sweden.  He is the author of Writing in Crisis: Ethics and History in Gordimer, Ndebele and Coetzee (UKZN Press, 2004) and editor of Literary Interactions in the Modern World, (Vol. 4 of Literary History: Towards a Global Perspective, de Gruyter, 2006).

Transnationalism in Southern African Literature: Modernists, Realists, and the Inequality of Print Culture