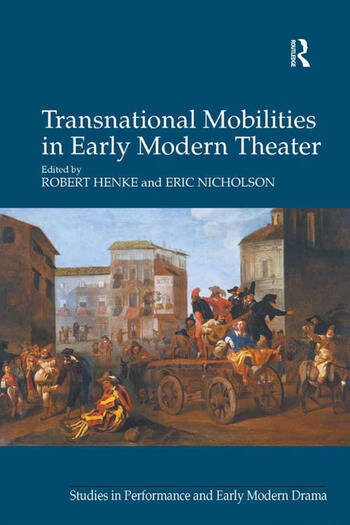 The essays in this volume investigate English, Italian, Spanish, German, Czech, and Bengali early modern theater, placing Shakespeare and his contemporaries in the theatrical contexts of western and central Europe, as well as the Indian sub-continent. Contributors explore the mobility of theatrical units, genres, performance practices, visual images, and dramatic texts across geo-linguistic borders in early modern Europe. Combining 'distant' and 'close' reading, a systemic and structural approach identifies common theatrical units, or 'theatergrams' as departure points for specifying the particular translations of theatrical cultures across national boundaries. The essays engage both 'dramatic' approaches (e.g., genre, plot, action, and the dramatic text) and 'theatrical' perspectives (e.g., costume, the body and gender of the actor). Following recent work in 'mobility studies,' mobility is examined from both material and symbolic angles, revealing both ample transnational movement and periodic resistance to border-crossing. Four final essays attend to the practical and theoretical dimensions of theatrical translation and adaptation, and contribute to the book’s overall inquiry into the ways in which values, properties, and identities are lost, transformed, or gained in movement across geo-linguistic borders.

Robert Henke is Professor of Drama and Comparative Literature at Washington University in St. Louis, USA, and the author of Pastoral Transformations: Italian Tragicomedy and Shakespeare's Late Plays (1997) and Performance and Literature in the Commedia dell'Arte (2002). With M.A. Katritzky, he is the editor of European Theatre Performance Practice, 1580-1750 (Ashgate, 2014). Eric Nicholson is a Lecturer at Syracuse University in Florence, Italy, where he teaches courses on comedy and theater. In Florence and elsewhere he has directed numerous full-scale productions of plays by Shakespeare, Molière, Flaminio Scala, and others. Their previous Ashgate collection is Transnational Exchange in Early Modern Theater (2008).

'The need for this book, for both scholars and students of early modern Europe, cannot be overstated. For many years research has productively aspired to global inclusivity in its understanding of the period’s theater and culture. The distinguished contributors to this book rise to the challenge brilliantly as they open the way for future work. Transnational Mobilities in Early Modern Theater is arguably the most groundbreaking and timely intervention that the field has seen since the cultural materialism of the 1980s.' Bryan Reynolds, Chancellor’s Professor of Drama, University of California, Irvine, USA 'The highly successful research collective Theatre Without Borders has done it again: this remarkable range of essays on early modern theatre demonstrates that research into the drama of Shakespeare, his British as well as his European contemporaries must be interdisciplinary and comparative if it wishes to develop a proper sense of the theatre’s participation in a distinctive mode of cultural mobility.' Ton Hoenselaars, Professor of Early Modern English Literature and Culture, Utrecht University, The Netherlands