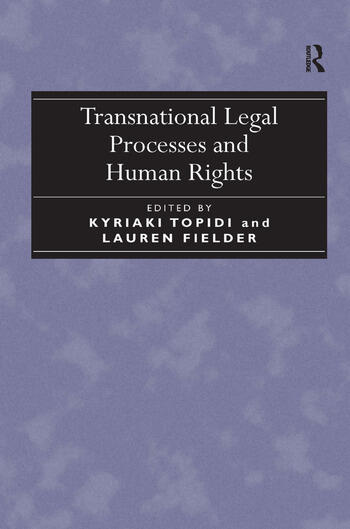 It is becoming increasingly common for human rights norms to be transferred between legal and political systems and this book is a fresh approach to the intersection of transnational law and the protection of cultural difference beyond the single state border. It investigates how the construction and evolution of human rights norms are transferred in transnational legal settings and asks whether law should reflect, express or control any given aspect of culture. The chapters explore the ways that law and cultural identity may or may not co-exist, particularly in circumstances where a prima facie clash is observed. Examining legal approaches to cultural differences from a comparative perspective and across a wide range of locations, the book covers topics such as juvenile punishment, religious defamation, religious rights and conflict between industry and indigenous communities. It will be of value to those working in the areas of transnational and comparative law, as well as those concerned with human rights and the intersection of law and cultural difference.

Kyriaki Topidi, PhD is a Senior Lecturer and Senior Researcher at the School of Law of the University of Lucerne. She teaches courses and researches on religious rights and has a research background in minority protection and EU law. She has published widely in these areas. Lauren Fielder, JD, LL.M. Professor Fielder teaches African Law, Protection of Vulnerable Groups and Transnational Litigation at the University of Lucerne, where she is the assistant director of the Transnational Legal Studies Program. She writes and speaks about human rights issues in Africa. She studied at the University of Texas in Austin.

’The book investigates in a refreshing manner the strong transnational dimension that characterizes the current protection of human rights. Respectful of the divide between international law and domestic law, its authors carefully examine the interaction, tension and cross-contamination between these legal orders as well as between different jurisdictions.’ Tarcisio Gazzini, VU University Amsterdam, The Netherlands ’This book is a welcome addition to the discourse on the processes by which law crosses borders and impacts human rights. It covers a diverse range of issues that are relevant to the transference of norms both vertically and horizontally as they affect various geographical regions. This is an ideal resource for all who study, and are interested in, norm transference in today’s world.’ Sha-Shana Crichton, Howard University School of Law, USA