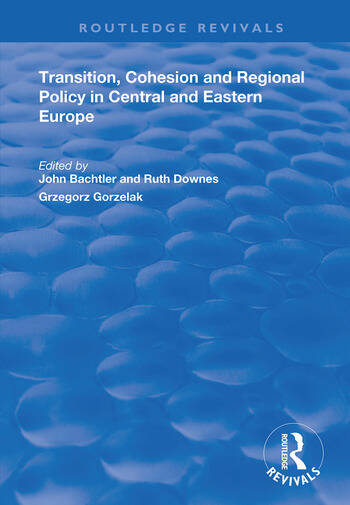 Transition, Cohesion and Regional Policy in Central and Eastern Europe

This title was first published in 2000. One of the most comprehensive overviews of regional development and policy emergence in the Central and East European countries to date, this book focuses on economic and social cohesion, bringing together a wide range of empirical research and discussion material.

’The editors have produced a coherent, systematic and relevant overview of regional development and regional policy that will be of interest to academic researchers and practitioners alike.’ European Access Plus ’...admirably structured...densely packed with helpful information...will certainly be of enormous assistance to the researcher, practitioner or student trying to grapple with the complexity of the issues at stake in trying to integrate the CEE countries into the new Europe.’ Regional and Federal Studies ’...the book certainly provides a valuable addition to the debate on post-socialist developments in general and ECE in particular. In offering a broad, yet systematic and coherent approach, it offers a good overview of the changes in ECE, their background and implications and encourages further debate and study. I shall certainly recommend it to our library and my students.’ European Urban and Regional Studies

Transition, Cohesion and Regional Policy in Central and Eastern Europe