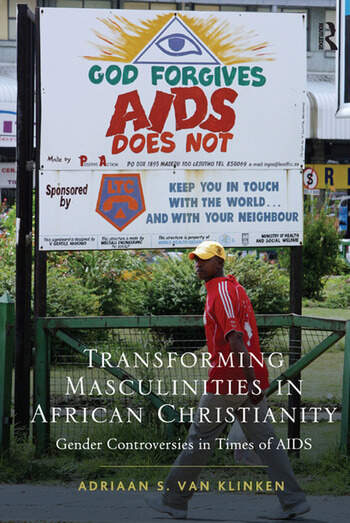 Studies of gender in African Christianity have usually focused on women. This book draws attention to men and constructions of masculinity, particularly important in light of the HIV epidemic which has given rise to a critical investigation of dominant forms of masculinity. These are often associated with the spread of HIV, gender-based violence and oppression of women. Against this background Christian theologians and local churches in Africa seek to change men and transform masculinities. Exploring the complexity and ambiguity of religious gender discourses in contemporary African contexts, this book critically examines the ways in which some progressive African theologians, and a Catholic parish and a Pentecostal church in Zambia, work on a 'transformation of masculinities'.

’Drawing on rich empirical material, Van Klinken offers a valuable insight into the complex issue of masculinity politics in contemporary African Christian contexts. A successful synthesis of a theological and anthropological approach, this is a fascinating book that explores new grounds in the study of Christianity in Africa.’ Birgit Meyer, Utrecht University, the Netherlands 'Van Klinken lucidly charts a shift from the bad man� rhetoric that characterises masculinity discourses, instead portraying the complexities of masculinities and how they are being transformed and can transform in the face of the enormous challenges that the HIV pandemic poses. The book makes a significant contribution to the growing body of literature on masculinities. A must-read for all scholars interested in gender and masculinities.’ Sarojini Nadar, University of KwaZulu-Natal , South Africa ’Van Klinken introduces current debates on Christianity and masculinity by progressive African theologians while grounding them in the congregational realities of two Zambian churches. This is a thorough comparative study of African Christianities in the midst of the AIDS calamity. A contribution both to global Christianities and to gender discourse as they intersect with religious obligations, Van Klinken anchors his analysis of African patriarchy in a methodological move he calls theological ethnography� and makes us attentive to the subtleties of the transformation of masculinities in local contexts. The incremental transformation of men toward responsible agency is presented as a move toward the fulfilment of an eschatological vision of gender justice.’ BjÃ¶rn Krondorfer, Northern Arizona University, USA ’This is an important study that throws new light on several fields at once: how Christianity is perceived concretely in sub-Saharan Africa, how different masculinities are being constructed and contested in that same region, and how both of these have an impact on comba