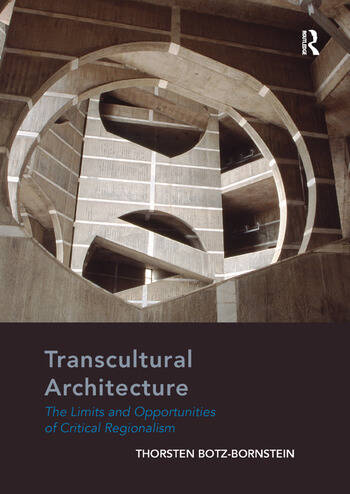 Transcultural Architecture: The Limits and Opportunities of Critical Regionalism

Critical Regionalism is a notion which gained popularity in architectural debate as a synthesis of universal, 'modern' elements and individualistic elements derived from local cultures. This book shifts the focus from Critical Regionalism towards a broader concept of 'Transcultural Architecture' and defines Critical Regionalism as a subgroup of the latter. One of the benefits that this change of perspective brings about is that a large part of the political agenda of Critical Regionalism, which consists of resisting attitudes forged by typically Western experiences, is 'softened' and negotiated according to premises provided by local circumstances. A further benefit is that several responses dependent on factors that initial definitions of Critical Regionalism never took into account can now be considered. At the book’s centre is an analysis of Reima and Raili PietilÃ¤’s Sief Palace Area project in Kuwait. Further cases of modern architecture in China, Korea, and Saudi Arabia show that the critique, which holds that Critical Regionalism is a typical 'western' exercise, is not sound in all circumstances. The book argues that there are different Critical Regionalisms and not all of them impose Western paradigms on non-Western cultures. Non-Western regionalists can also successfully participate in the Western enlightened discourse, even when they do not directly and consciously act against Western models. Furthermore, the book proposes that a certain 'architectural rationality' can be contained in architecture itself - not imposed by outside parameters like aesthetics, comfort, or even tradition, but flowing out of a social game of which architecture is a part. The key concept is that of the 'form of life', as developed by Ludwig Wittgenstein, whose thoughts are here linked to Critical Regionalism. Kenneth Frampton argues that Critical Regionalism offers something well beyond comfort and accommodation. What he has in mind are ethical prescripts closely linked to a

Thorsten Botz-Bornstein was born in Germany and studied philosophy in Paris and Oxford. As a postdoctoral researcher based in Finland he undertook extenÂ­sive research on Russian formalism and semiotics in Russia and the Baltic countries. He has also been researching in Japan, in particular on the Kyoto School and on the philosophy of Nishida KitarÃ´. At present he is Associate Professor of Philosophy at the Gulf University for Science and Technology in Kuwait. His publications are: Place and Dream: Japan and the Virtual (Rodopi, 2004); Films and Dreams: Tarkovsky, Sokurov, Bergman, Kubrik, Wong Kar-wai (Lexington Books 2007); La Chine contre l’Amérique. Culture sans civilisation contre civilisation sans culture? (Paris: L’Harmattan 2012) ; Vasily Sesemann: Experience, Formalism and the Question of Being (Rodopi 2006); Aesthetics and Politics of Space in Russia and Japan (Lexington Books 2009); The Cool-Kawaii: Afro-Japanese Aesthetics and New World Modernity (Lexington 2010); The Veil in Kuwait: Gender, Fashion, Identity (with Noreen Abdullah-Khan, Palgrave 2014); Editor of: The Philosophy of Viagra: Bioethical Responses to the Viagrification of the Modern World (Rodopi, 2011); Inception and Philosophy: Ideas to Die For (Chicago: Open Court, 2011). Re-ethnicizing the Minds? Tendencies of Cultural Revival in Contemporary Philosophy (Amsterdam: Rodopi, 2006). The Crisis of the Human Sciences: False Objectivity and the Decline of Creativity (2010) Nature Culture, Memes (2008).

Transcultural Architecture: The Limits and Opportunities of Critical Regionalism