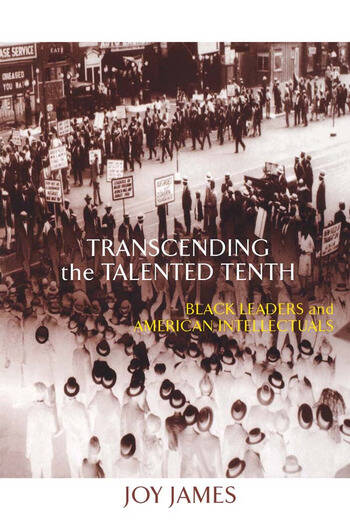 In Transcending the Talented Tenth, Joy James provocatively examines African American intellectual responses to racism and the role of elitism, sexism and anti-radicalism in black leadership politics throughout history. She begins with Du Bois' construction of "the Talented Tenth" as an elite leadership of race managers and takes us through the lives and work of radical women in the anti-lynching crusades, the civil rights and black liberation movements, as well as explores the contemporary struggles among black elites in academe.

Joy James teaches in the Department of Ethnic Studies at the University of Colorado at Boulder. She coedited Spirit, Space and Survival (Routledge, 1993) which won the Gustav Myers Human Rights Award; and is author of Resisting State Violence: Radicalism, Gender, and Race (University of Minnesota, 1996).

"James represents an important voice in the current debate around the future of the race." -- Quarterly Black Review of Books
"In her excellent discussion of the origins of the term 'talented tenth'...James follows its articulation by Du Bois from 1900 onward." -- Journal of American History
"Transcending the Talented Tenth proposes original analyses of historical portrayals of the African American intelligentsia as a way of understanding the contested terrain on which contemporary black intellectuals work. At a time when the field of African American Studies is undergoing rapid transformations and the role of black public intellectuals is being passionately debated, Joy James' work is a pioneering intervention." -- Angela Y. Davis, University of California, Santa Cruz
"Americans have a hard time thinking about race, gender, and class at the same time, especially when intellectuals are in question. But not Joy James. Her refreshing discussion of black thought refuses to stop with men or the highly educated. This is what African-American Studies is about in the best sense of the phrase." -- Nell Irvin Painter, Edwards Professor of American History, Princeton University
"Joy James has written an important book. Here is a work that lays to rest once and for all the dominant stereotype that African Americans lack a compelling intellectual legacy." -- David Theo Goldberg, author of Racist Culture
"Drawing the lines of inter-connection between class, race and gender, Joy James gives to us an important handle on the common ground of struggle that engages all who would change this to a more just and equal society as we enter the 21st century." -- Charlene Mitchell, Committees of Correspondence
"...James examines the increasingly larger role played by black intellectuals, their legacy and their responsibilities to their people." -- Publishers Weekly
"Calling for a radicalism that engages the continuum of the black political struggle from the earliest slave rebellion to contemporary battles against racism and ehtnocentrism, James models the initial critique necessary for transcendence of the conventional talented tenth." -- SIGNS Spring 2000
"A thoughtful study..." -- Library Journal